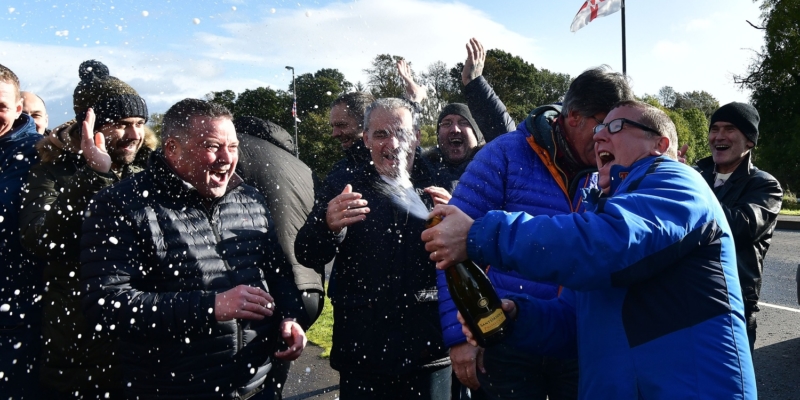 Pacemaker Press 10/10/19 Wrightbus workers celebrate as news breaks that a Deal was reached 'in principle' for Wrightbus sale. Bidder Jo Bamford said agreement had been reached with "the Wright family for the Wrightbus factory and land". "We are still to conclude a deal with the administrators but are pleased to report this important step in the right direction. "I would like to thank Ian Paisley for his hard work and diligence in helping to mediate what has at times been a tricky negotiation." Pic Colm Lenaghan/Pacemaker

A deal has been done between the owner of the Wrightbus factory site Jeff Wright and industrialist Jo Bamford.

The two had been at loggerheads over a disagreement over land to complete the deal for the collapsed company.

Jo Bamford – whose family own the construction equipment firm JCB – said he was delighted to finally complete a deal in principle with the Wright family for the factory and the land.

“We are still to conclude a deal with the administrators but are pleased to report this important step in the right direction.

“I would like to thank Ian Paisley MP for his hard work and diligence in helping to mediate what has at times been a tricky negotiation.”

In a statement Jeff Wright said the agreement – after intense negotiations overnight – was in the best interests of the long term sustainability of bus manufacturing in Ballymena and for business and jobs.

“Mr Bamford’s firm will acquire the entire premises at Galgorm including the factory, fixtures and fittings as well as the associated land,” he said.

Mr Wright said he had gifted 40 acres of family-owned farmland to Mid and East Antrim Borough Council by way of a legacy for the people of Ballymena in recognition of their contribution over 70 years to the service of Wrightbus.

He added: “This legacy gift is a tribute not only to my father, his father before him, and the Wright family members but most importantly  it is a tribute to the generations of workers who helped build a proud manufacturing tradition in Ballymena.

“It is my true wish to see this legacy used for the purposes of expanding manufacturing and benefiting our local community.”

He said: “After weeks of hard work a deal has now been made on the Wrightbus site and is concluding the final arrangements with the administrator to take over Wrightbus and get men and women back to work building buses.

“The farm land that will be a legacy to William Wright’s industrial prowess is a fitting tribute to him and I know that Jo Bamford will work with the council on making sure that is used accordingly. To the workers of Ballymena I salute your fortitude and patience.”

Former Wrightbus director Jeff Wright and Jo Bamford traded blows in statements to the media on Thursday as efforts to reach a deal looked to be in jeopardy.

Speaking from the site of the factory this morning, Unite the Union spokesperson Susan Fitzgerald said: “When it comes down to securing a future for communities, the only reliable people are workers themselves and their organisations like the trade unions.”

It remains to be seen what conclusion will be reached over the employment of hundreds of the 1,200 workers made redundant by the collapse of the Ballymena firm.

The parties were at loggerheads over whether or not all the land on the former JTI Gallaher’s site in Ballymena, where Wrightbus is now based, were included in a sale. It’s understood Jo Bamford, whose company Ryse Hydrogen has already finalised a separate deal to buy Wrightbus, regarded the land as part of the deal. But Jeff Wright claimed that Mr Bamford had asked for the “farmlands” to be included.

Speaking about his decision Mr Wright said: “This legacy gift is a tribute not only to my father, his father before him, the Wright family members but most importantly the generations of workers who helped build a proud manufacturing tradition in Ballymena. It is my true wish to see this legacy used for the purposes of expanding manufacturing and benefiting my local community.

“Mid and East Antrim Borough Council have ambitious manufacturing plans, led by Council Chief Executive Anne Donaghy, for Ballymena, and the Wrightbus legacy lands could be used for a landmark project to grow jobs and industry.

“I believe this use of the Wrightbus legacy land would send a clear message to Northern Ireland and beyond that Ballymena has a strong future in advanced manufacturing.

“Council is in ongoing negotiations with Queen’s University in terms of research and development support, and the site will be proposed to form a key asset in the Advanced Manufacturing Innovation Centre (AMIC) project which is part of Belfast Region City Deal and also part of Council’s advanced manufacturing ecosystem vision.”