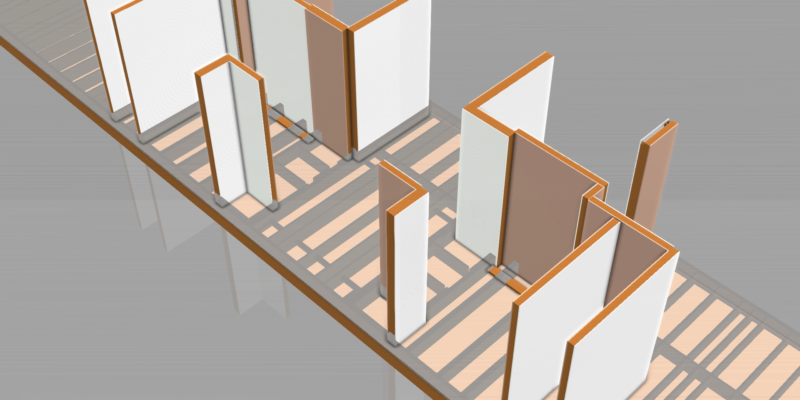 In this case study, we’ll show you how Wiksfors Technology, a visionary high-tech start-up, used Visual Components to visualize the assembly of a complete house module, starting from single boards and sheets to a completed box with outer and inner walls, floor, and ceiling.

Wiksfors Technology is a visionary high-tech start-up based in Sweden with a focus on the house manufacturing industry. The company consists of production and automation engineers that are committed to reforming the way of developing modular houses coming straight out of a factory. Wiksfors Technology has for a long time been strongly convinced that simulation technology is the key to all production development.

The power of being able to virtually test out concepts and evaluate ideas both from a technical, and economic standpoint is essential for selecting the best production method,

Wiksfors Technology wanted to use a customizable simulation platform for this project where they could utilize their available product data for modular housing. They searched for different options and found Visual Components to be the most suitable platform for their use case.

This case study is a first step towards the long-term goal of Wiksfors Technology having a customizable portfolio of full-scale simulation models for modular house factories.

The scope of this case study was to take a starting point in existing product data of a modular house and visualize the assembly of the complete house module all the way from single boards and sheets to a completed box with outer walls, inner walls, floor, and ceiling. In this first step, machines, robots and human operators are fully excluded as that part occurs during the next phases of the project, and focus is kept on the product and the assembly itself.

Wiksfors Technology believes that the machines, robots, and manual methods are the heart of the factory, and that the design of the product (house modules) will need to be adapted to fit a solid production facility. Talking about the project, Pontus further added, “It is not the design that will drive the manufacturing process, it is the manufacturing process that will drive the design.”

The modular house industry is sometimes called a “Snowflake production”, a manufacturing system where each product is unique and different from the other. In this case, the product is the house modules. This project has challenged the Visual Components platform’s ability to handle large volumes of components with unique dimensions and assemble them in unique ways where each house module can be different from the previous one. Speaking about the challenges and solutions, Pontus mentioned, “one of the solutions to this challenge was that Wiksfors Technology developed their own custom .NET plugins and python scripts to easily extract data on demand, from various places within the simulation model”.

Here is the step wise workflow of how Wiksfors technology simulated the first phase of this project.

1. An XML-file describing all geometry of the complete module and its existing boards and sheets is imported into the system using their custom plugin.

2. Wall Frame creation: Boards fly out one by one to their correct positions in the wall and gradually the frame is being built up.

3. Wall sheeting first side: Sheets fly out one by one to their correct positions, merging into the wall, and gradually the wall is sheeted.

4. Wall MEP (Mechanical Electrical and Plumbing): Some custom insulation, electrical outlets and piping fly out to their correct positions in the wall.

5. Wall sheeting second side: Sheets fly out one by one to their correct positions, merging into the wall, and gradually the second side of the wall is sheeted.

6. Floor: Floors are assembled with board assemblies and frames which go through both layers of wall sheeting and MEP (Step 2 to 5 are repeated for the floor elements).

7. Ceiling: Ceiling is assembled in the same way with frame creation, which goes through both layers of wall sheeting and MEP (Step 2 to 5 are repeated for the ceiling elements).

X-ray view of the house assembly

It took about 160 hours, or less than seven working days, for Wiksfors Technology to simulate different scenarios of house assembly with Visual Components. The benefit of using Visual Components was utilizing the available data and setting up the visualization of how all the elements come together in their specific locations in a modular house. An additional benefit was the extraction of simulation as a powerful marketing asset/video.

This case study has been a fruitful cooperation between Visual Components and Wiksfors Technology, where a one-of-a-kind simulation model of a modular house production is built up from scratch. The project is a perfect blend of Visual Components production simulation platform and Wiksfors Technology’s knowledge and experience of house manufacturing data.

The vision of Wiksfors Technology is to model a fully automated and scalable production system of modular houses with a complete hierarchy of processes. Visual Components simulation will keep playing a vital role in the simulations of this project’s next phases. 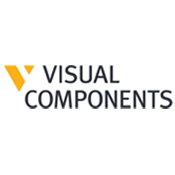 Visual Components is a proud member of the FactoryNOW initiative

With over 20 years in business, Visual Components is one of the pioneers of the 3D manufacturing simulation industry. Check out our story.