Uniti One electric car available to order from £15,100 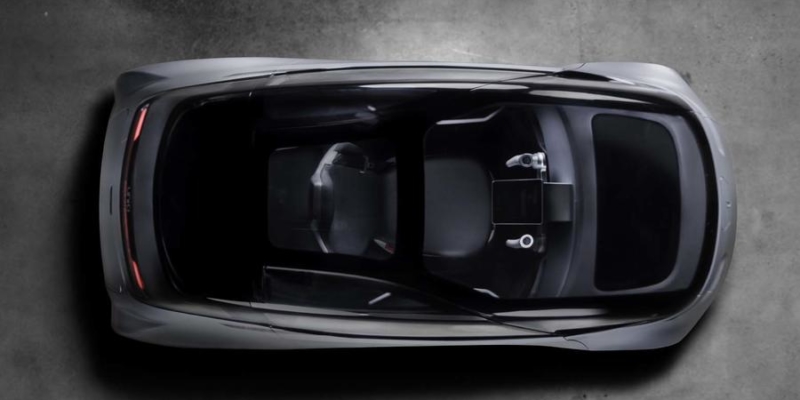 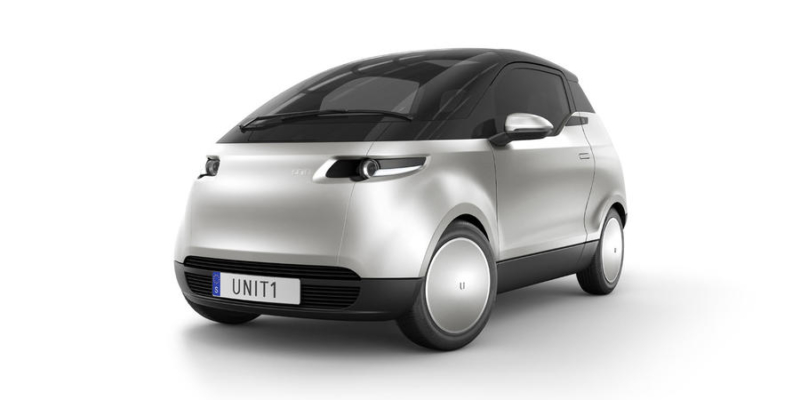 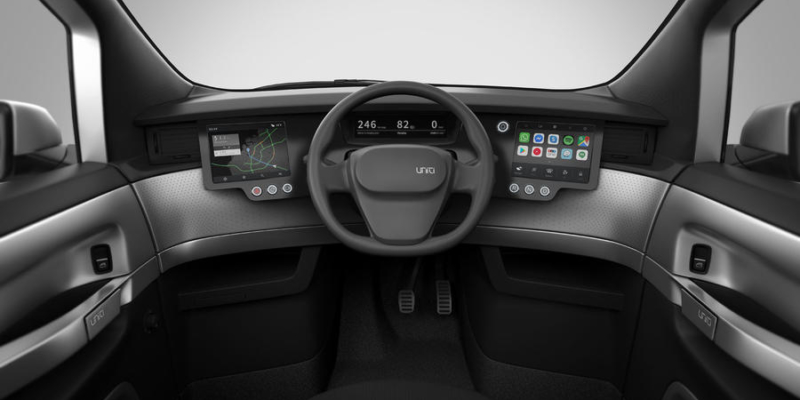 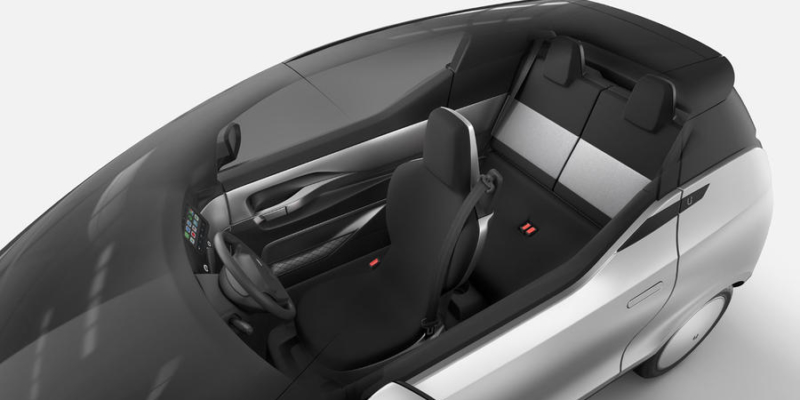 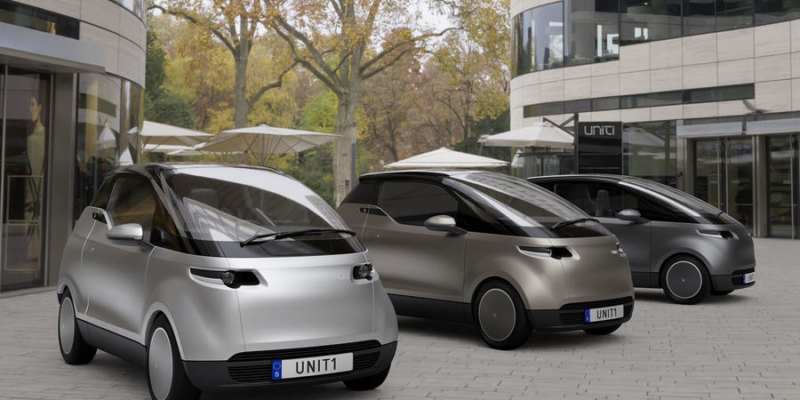 The British-engineered compact EV will arrive in Sweden and the UK first in mid-2020, with a choice of battery capacities and prices starting from £15,100 including government grant.

Entry-grade 12kWh models will be capable of 96 miles between charges, while the optional 24kWh battery pack iextends that range to 186 miles. The larger battery can be charged from 20% to 80% in seventeen minutes on a 50kW CCS charger, while the 12kWh model takes just nine.

A 67bhp electric motor drives the rear wheels only, reaching 31mph in a claimed 3.4 seconds and 62mph in 9.9. Top speed is 75mph, with separate City and Boost drive modes to alternate between efficiency and sharpened response.

The three-seat EV, which weighs as little as 600kg, has a central driving position and room for two rear passengers. The steering wheel is flanked by two touchscreens, which are powered by Google’s Android Automotive software, and control the majority of the car’s functions. Drive, Neutral and Reverse gears are selected with individual buttons mounted on the dashboard. There is no key: the car is locked and started using a secure smartphone app.

An electrochromic sunroof, which can be adjusted from transparent to fully opaque, comes as standard, and automatically darkens when parked to keep the cabin cool. Other equipment includes rear LED lighting and LED daytime running lights, with full LED headlights an option.

The One has 155 litres of luggage space, which can be extended to 760 litres when the rear seats are folded flat.

The car can be ordered in a choice of Scandium, Graphite and Titanium colours. Customers placing their order before December 2019 will earn membership to Uniti’s ‘Founders Club’, which includes free software upgrades for the life of the car

The Uniti One will be first produced at a “pilot plant” operating out of Silverstone Park, part of the famous grand prix circuit, by 2020.

The facility, which the company is calling “the UK’s first fully digitised electric vehicle production site”, will serve as a template that will influence future global production, as the company ramps up to its target of 50,000 units per year.

“The UK’s approach to vehicle production, with its focus on light-weighting and innovation in advanced materials, is an ideal model for electric car production globally,” Uniti CEO Lewis Horne said.

“It’s no secret that some of the world’s best vehicle engineers are clustered around Silverstone. When coupled with a government receptive to our ambition and goals, we couldn’t find a better home to establish our pilot production facility.”

The pilot plant is predicted to create 100-150 jobs within Uniti, a number that will increase once partners supporting the production ecosystem are taken into account.

Uniti has ambitions to become a “major player” in the British EV market over the next few years and plans to establish a London office that will ensure the necessary capital is raised to meet its tight time goals.

The announcement came at a tough time for the British car industry, with the uncertainty surrounding Brexit leading other manufacturers to look farther afield for their production facilities. Jaguar already builds the I-Pace electric SUV in Austria, and Nissan weighing up the possibility of moving production of the new Juke abroad.

Uniti has worked with several companies, including energy supplier E.ON, which is offering its customers five years’ worth of free energy to charge a Uniti at home.

The brand claims that the One will produce 75% less CO2 over its lifetime – from manufacturing to disposal – than a conventional vehicle. CEO Horne said the electric vehicle, developed as part of a three-year programme, is made from recyclable carbonfibre and organic composite materials to reduce its environmental impact.

Horne explained that these materials can be manufactured via a fully automated process and described the car’s structure as “scalable”, with two, four and five-seat variants planned for production.

Uniti aims to supply each market from within that market, using automated production centres and digital twinning technology supplied by Siemens. This would allow assembly line schematics to be shared anywhere in the world, to set up plants with enough capacity to fulfil the production demand of a particular market. The entire production line would be automated, with staff mainly focused on quality control at the end of the process.

The proposed system would provide a more environmentally friendly alternative to the traditional manufacturing process, which relies heavily on transportation networks to distribute cars from a single central production facility.

While originally conceived as a quadricycle, the One is now classed as an M1 passenger car, and must pass safety tests. The company is working with the nearby Millbrook proving ground on virtual crash testing, in an effort to further reduce environmental impact. Currently there are several tests that can’t be simulated, and legislation would need to be changed before they could replace traditional crash tests.

Following the UK’s example, future proposed sites include Mexico, Australia, the US, India, Dubai and Georgia. Each will be operated on a franchise model. “The automotive world has always used franchise models, in the form of dealerships,” Sally Provoltsky, Uniti’s vehicle development director, explained. “Uniti is an unbranded box, and we know all markets are different, so we can adapt to them instead of forcing everyone to conform.”

The autonomous-capable car has been made with lightness as a priority. It weighs 450kg. Horne explained that the One’s design is centred on maximising battery performance, with the highest-ranking version predicted to be capable of up to 186 miles on one charge.

Power comes from a 22kWh battery and two electric motors producing a combined 40bhp peak, with Uniti targeting a zero to 50mph time of less than four seconds and an 80mph top speed.

Inside, passengers face a full-width interactive head-up display, with the car’s controls operated “electronically” rather than with switches and levers. The car will have human-machine interface technology, meaning features will be controllable via open dialogue.

Uniti produced a concept virtual reality cockpit called Kepler Pod in 2017 to demonstrate the effectiveness of such systems.

The company began taking €149 deposits last year, with 3000 orders placed ahead of the car’s official debut. The first customers will be offered the chance to take part in a beta testing scheme, in which they run the car and provide feedback to finalise its development.

The One is focused on the second family car market and is designed for the daily commute. Its small dimensions make it suited to city driving, while having more interior space than today’s city cars. The second Uniti model, already in the early planning stages, is proposed as a 2+2 car, with a high number of parts interchangeable with the One.

Uniti’s home market of Sweden and surrounding Nordic countries have been among the world’s quickest to adopt electric cars. Norway was the first to pledge a ban on petrol and diesel cars with the intention of having only electric vehicles on sale from 2025.