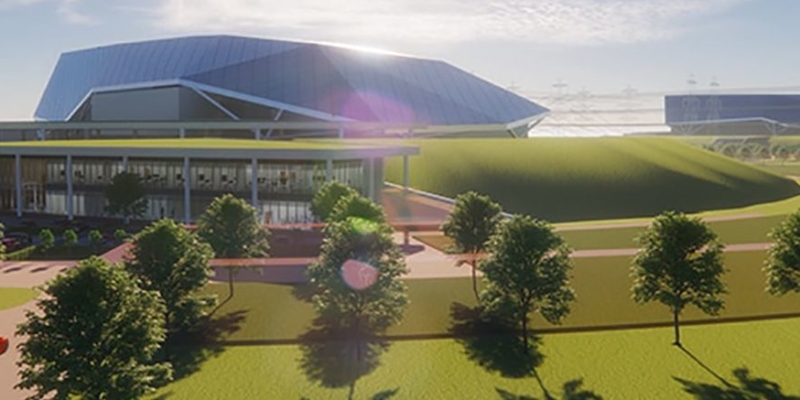 The UK small modular reactor (SMR) consortium, led by Rolls-Royce, which is creating a compact nuclear power station, has revealed its latest design and an increase in power as it completes its first phase of development on time and under budget.

It has also announced it is aiming to be the first design to be assessed by regulators in the second half of 2021 in the newly-opened assessment window, which will keep it on track to complete its first unit in the early 2030s and build up to 10 by 2035.

As the power station’s design has adjusted and improved during this latest phase – with more than 200 major engineering decisions made during this latest phase – the team has optimised the configuration, efficiency and performance criteria of the entire power station , which has increased its expected power capacity, without additional cost, from 440 megawatts (MW) to 470MW.

The refreshed design features a faceted aesthetic roof; an earth embankment surrounding the power station to integrate with the surrounding landscape; and a more compact building footprint, thanks to successes optimising the use of floor space.

With a focus on continuing its progress at pace, the UK SMR team is transitioning from being a collaborative consortium to a stand-alone business, which will deliver a UK fleet of power stations to become a low carbon energy bastion alongside renewables, while securing exports to make the power station a key part of the world’s decarbonisation toolkit.

“Nuclear power is central to tackling climate change, securing economic recovery and strengthening energy security. To do this it must be affordable, reliable and investable and the way we manufacture and assemble our power station brings down its cost to be comparable with offshore wind at around £50 per megawatt-hour.

“As we reach the end of our first phase, I’m proud that our team has designed a product that can be commoditised to provide the scale required to be a key part of the world’s decarbonisation efforts. We are ready to go and hope to be first in line to start the rigorous Generic Design Assessment process in the Autumn of this year.”

In the UK alone the power station programme is forecast to:

The design, which will be finalised at the end of the regulatory assessment process, proposes that all used fuel will be stored on each site for the lifetime of the plant.

The power station’s design cuts costs by using standard nuclear energy technology used in 400 reactors around the world, so no prototyping is required. The components for the power station are manufactured in modules in factories, before being transported to existing nuclear sites for rapid assembly inside a weatherproof canopy. This replicates factory conditions for precision activities and further cuts costs by avoiding weather disruptions. The whole sequence secures efficiency savings by using streamlined and standardised processes for manufacturing and assembly, with 90% of activities carried out in factory conditions, helping maintain extremely high quality. In addition, all spoil excavated will be reused on site to build the earth embankment, removing the need for it to taken off site, reducing road journeys that are both financially and environmentally costly.

The consortium members feature the best of nuclear engineering, construction and infrastructure expertise in Assystem, Atkins, BAM Nuttall, Jacobs, Laing O’Rourke, National Nuclear Laboratory, Nuclear Advanced Manufacturing Research Centre, Rolls-Royce and TWI. Consortium colleagues have worked in integrated teams – remotely during Covid – across all aspects of the first phase of the programme to progress the design and ensure innovations were targeted only at elements of the power station that would drive down costs.