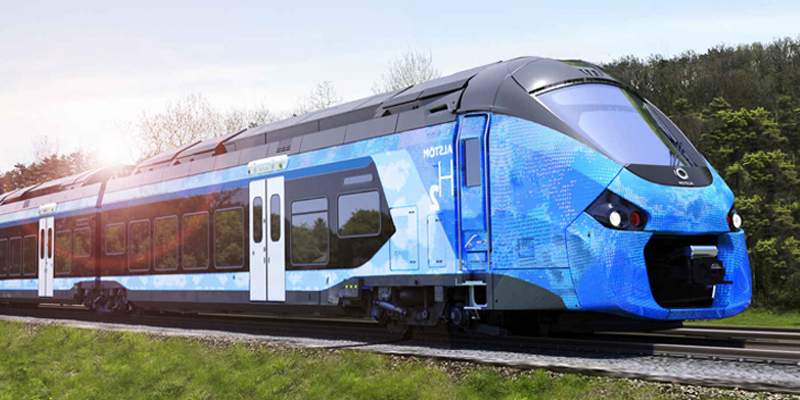 Train-maker Alstom has signed a deal to share their knowledge so that they can build the UK’s first hydrogen train fleet.

The Derby manufacturer, Alstom and Hynamics, today signed a partnership agreement to optimise the hydrogen refuelling of passenger trains. This collaboration will accelerate the development of hydrogen trains and reduce the time needed to refuel them.

The two companies would share the technical and commercial information necessary for Alstom to develop the new fleet in the UK which would be based on the Aventra loco currently built in Derby.

The two businesses said they were committed to taking a leading role in supporting the UK and Scotland Government ambitions to decarbonise its rail sector by 2040 – and the Scottish Government’s objective of doing so by 2035.

“COP26 is a reminder of just how urgent the need to decarbonise our world is. Rail is already the lowest emission transport mode, but we can do even more, and I am delighted that we have concluded this agreement with our friends at Eversholt Rail which will lead to Britain’s first ever fleet of new hydrogen trains.”

“It is important that we start sooner rather than later to decarbonise UK Rail if we are to meet the 2050 ‘net-zero’ target. Hydrogen propulsion will play an important role, and this project with Alstom will demonstrate how the private sector can work together to make a difference.”

Both companies believe that there is a market for a fleet of new trains in Britain.

The Alstom and Hynamics teams are already carrying out joint modelling, calculation, and simulation work. This work, which notably mobilises the skills and resources of “EDF Lab”, will then be tested from 2022 on the electrolyser test platform at the ‘EDF Lab Les Renardières’, one of three R&D centres of Électricité de France located in Écuelles (Seine-et-Marne). A hydrogen production station, a compressor up to 450 bars and several storage racks will be mobilised to recreate the filling circuits at real size and to evaluate the behaviour of the equipment under optimal observation conditions.

Ultimately, the aim is to define an international refuelling standard that will make it possible to limit the immobilisation of hydrogen-powered trains during refuelling, which is a major issue for both railway companies and passengers, while complying with the regulations and safety rules in force.

“This partnership will enable us to optimise the hydrogen distribution infrastructure and the rolling stock made available to operators. This is a project that presents many opportunities for the decarbonisation of transportation and the development of sustainable mobility”