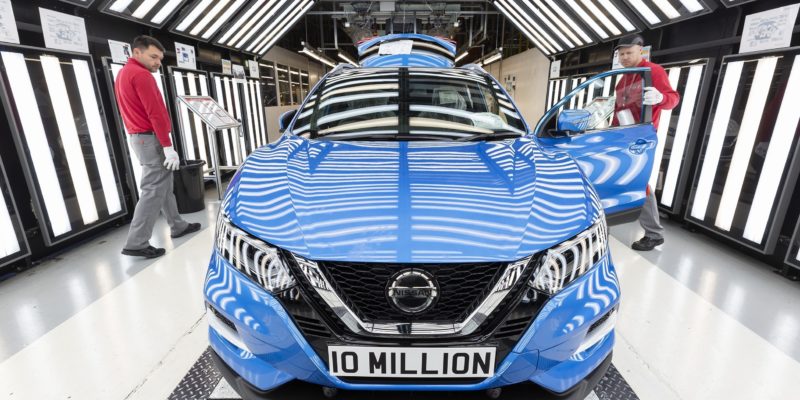 It has taken the plant 33 years to reach the ten million mark – making it the fastest car factory in the UK to the landmark figure. It also means that, on average, a new car has been built in Sunderland every two minutes since production started in 1986.

And if all ten million cars were parked nose to tail they would stretch for more than 42,000km – which is enough to go all the way around the equator of the world, with a few to spare.

“Reaching this huge figure has called on all the ingenuity, commitment and spirit of our highly skilled workforce, many of who hail from the North East of England.

“Together we are determined to continue to drive up the high quality standards our customers have come to expect over the last three decades.”

The ten millionth car was a Vivid Blue Nissan Qashqai Tekna, complete with ProPILOT technology, which controls the steering, acceleration and braking in a single lane on highways during heavy traffic congestion and high-speed cruising. The pioneering crossover is also the most produced model at the plant, contributing more than 3.4 million to the overall figure. Micra is the second most produced car, with close to 2.4 million being built in Sunderland.

Qashqai is one of nine main models to be built at the plant since the first Bluebird was built in 1986 and it is one of three currently made at the plant, alongside the all-electric LEAF and Juke. Last year production of Juke passed one million, with Primera the only other model to hit seven figures at just under 1.5 million.

Nissan Sunderland Plant was built on the site of a former airfield, with a ground breaking ceremony taking place in July 1984. The first Bluebird rolled off the line two years later in 1986, and production for the first year was 5,139. The total workforce at that time was 470, compared to about 7,000 today.