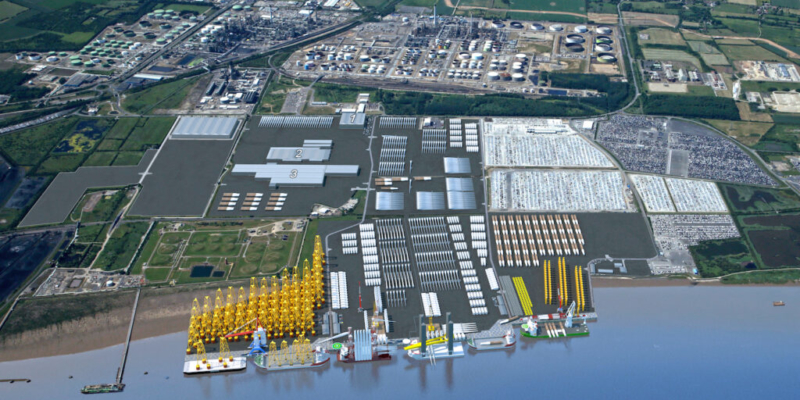 SeAH Wind has announced plans to invest £260m over the next three years to build a new factory in the UK, producing steel monopiles for offshore wind turbines. SeAH Wind, a UK-based subsidiary of SeAH Steel Holdings, was established this February to enter the global offshore wind power substructure market.

SeAH Wind’s monopile factory will be constructed at the ABLE Marine Energy Park), located south of the Humber River, supported by a government grant. SeAH’s Humber facility is expected to have the world’s single largest monopile manufacturing capacity.

SeAH originally announced to build a monopile manufacturing facility with an annual capacity of 160,000 tons. However, the capacity has been increased  by 150%, reaching some 240,000 tons. in order to respond to the sharp increase in global demand of monopiles followed by the rapid growth of the offshore wind market. Start of manufacturing operations is anticipated to begin in 2023. With the expanded plan, SeAH is planning to create up to 750 direct new jobs by 2030.

Business and Energy Secretary of the UK Kwasi Kwarteng said:

“Our offshore wind sector is a true UK success story, with more capacity installed than any other country and we are ensuring that our manufacturing base can be equally world-leading. “Thanks to Government backing, we have created a port hub on the south bank of the Humber that is allowing us to grow our manufacturing capabilities and I’m delighted to see this investment from SeAH creating hundreds of high-skilled jobs and helping to revitalise one of our key industrial heartlands.”

“Based on the active support and trust from the UK government, it is meaningful for SeAH that investment toward the monopile factory is in full swing. As the only monopile supplier in the UK offshore wind supply chain, we are already expecting promising results from commercial negotiations with our UK customers as well as European customers. We are also planning to aggressively target the US and Asian offshore wind substructure market with the successful UK business model.”

“This announcement is the culmination of sustained and considerable efforts by many parties. Government policy, our own ambitions and the appetite of the offshore wind sector are now well and truly aligned and have created this exceptional opportunity and one that will resonate locally, nationally as well as in global terms. Clearly this is a defining moment for AMEP development and our thanks are warmly extended to the entire SeAH team who have recognised, and shared, our faith and belief in the project. Whilst we expect to see further similar announcements in the not too distant future, we cannot overstate the significance and impact of this first commitment.”