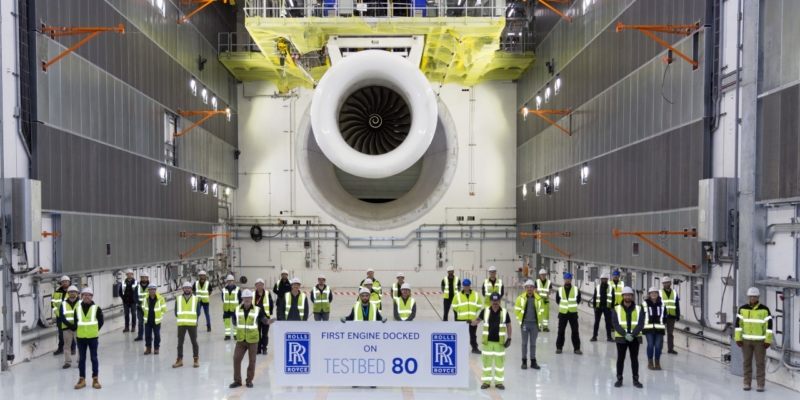 Rolls-Royce has successfully completed the first engine run on its state-of-the-art Testbed 80, which will be the largest and smartest indoor aerospace testbed in the world when it is officially opened in the coming months.

With an internal area of 7,500m2, making it larger than a Premiership football pitch, the testbed conducted its first run on a Rolls-Royce Trent XWB engine at the test facility in Derby, UK. This is a major milestone in the project which has been under construction for almost three years and represents a £90m investment.

Chris Cholerton, President Rolls-Royce Civil Aerospace, said: “Today is an important landmark in our journey towards a more sustainable future for aerospace and aviation. Testbed 80 will not only test engines such as the Trent XWB – the world’s most efficient aero-engine in service – but also the engines and propulsion systems of the future, which will see us take another step towards decarbonisation. It’s great that the first engine test has been a success and we are looking forward to the official opening of the facility in the coming months.”

Testbed 80 has been designed to test a range of today’s engines, including the Trent XWB and the Trent 1000, but will have the capability to test the UltraFan® demonstrator, our blueprint for the next generation of even more efficient engines, as well as the hybrid or all-electric flight systems of the future. The versatility of the testbed means it is able to accommodate engines of all sizes up to 155klbf thrust – that’s enough power to launch a Boeing 747 with one (huge) engine.

As part of our decarbonisation strategy we are also committed to promoting the scaling up of Sustainable Aviation Fuels (SAFs), which can already be used as a “drop-in” fuel in our existing engines. To support this commitment, Testbed 80 is equipped with a 140,000 litre fuel tank (you could fill your car up almost 3,000 times with this amount of fuel) for different fuel types, including Sustainable Aviation Fuel.

The data systems inside Testbed 80 are more capable and complex than any of our existing testbeds, delivering data in the fastest time directly to secure storage, linked for the first time to our analytical models and engineers. We can collect data from more than 10,000 different parameters on an engine, using an intricate web of sensors that detect even the tiniest vibrations at a rate of up to 200,000 samples per second. The data helps us understand our engines better, monitoring how every single component behaves in a range of conditions, and consequently providing crucial insights to inform future engine improvements for availability and efficiency.

The testbed is also home to a powerful x-ray machine that is able to capture 30 images per second and beam them directly to a secure cloud, where engineers around the world can analyse them along with the 10,000 other data parameters we can measure. Rolls-Royce is the only engine manufacturer in the world to x-ray its engines while they are running.

Part of the new technology development for Testbed 80, specifically for the UltraFan, has been supported by the ATI’s PACE project.