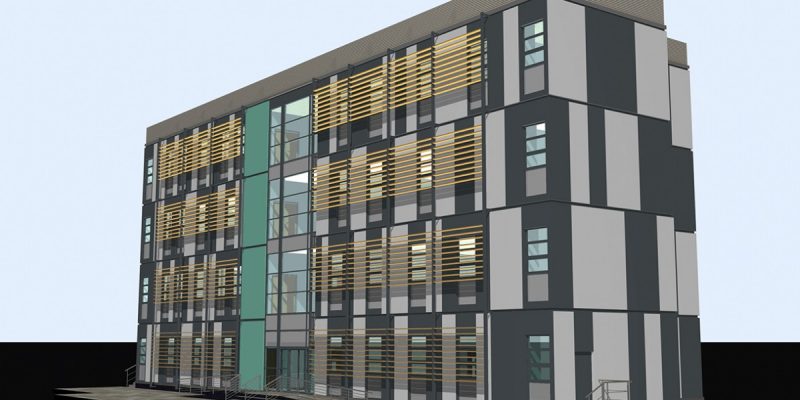 The Manufacturing Technology Centre has been playing a key role in an industry consortium which seeks to pave the way to create componentised solutions for buildings. Initially tackling the standardisation of school components, this elegant solution could soon be seen as the de facto grid system “building block”, for rapid digital design and supply chain alignment.

Commenting on the partnership’s vision, Richard Crosby, director of Blacc, said “By applying greater use of standardisation, the aim is to develop a series of components to enable multiple offsite specialists to achieve unprecedented economies of scale and efficiency in manufacturing. This will bring a higher degree of stability, predictability and transparency to the procurement process – to the benefit of both the client and the supply chain. It represents a window into a brave new world for UK construction.”

Susan Hone-Brookes, chief engineer for construction and infrastructure at the MTC said, “This project will act as the fundamental catalyst which will form the core basis around all future building solutions, be it ‘off-site’, ‘near site’, or on site assembly.  We are at the start of an exciting journey which will ultimately assist in the drive and delivery of the government’s construction targets.  The initial results have been encouraging with the frame component parts delivering a 70 per cent reduction in parts and 50 per cent reduction in weight which all contribute to an impressive embodied carbon reduction. Furthermore, the solution is fully de-constructible as final assembly is a bolted solution.

Darrin Witcher, senior transformation advisor at the MTC said the first step on the construction component journey was the standardisation of the modular frame. “The consortium has developed a universal connector which enables frame connections across the industry to be standardised vertically and horizontally.  Think of it as the ‘Lego’ building block for building design,” he said.

“Five hundred new schools need to be built every year with a £5 billion investment pipeline. Demand is outstripping supply and without significant innovation it will not be possible to deliver these schools at the volume and pace needed. By standardising, it will be possible to reach design solutions quickly and build schools with components from multiple suppliers, sharing orders and smoothing order books, giving stability and predictability.” he added.

Outputs from the project will be ready for use and adoption later this year.  The consortium seek to build on this initial work with a focus on environmental components (facades, MEP, low carbon solutions) together with the expansion of a digitally-enabled componentised construction production system. SEISMIC is establishing ground rules for the future development of all building construction components.