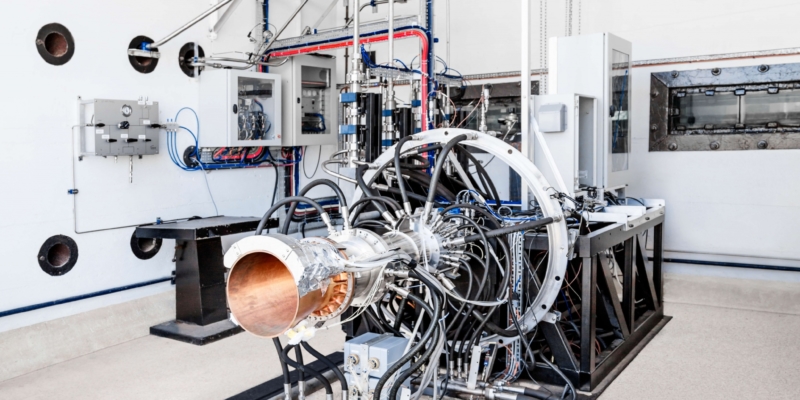 Oxfordshire-based Reaction Engines has successfully tested its innovative precooler at airflow temperature conditions representing Mach 5, or five times the speed of sound, marking a significant milestone in the development of its SABRE™ engine and paving the way for a revolution in hypersonic flight and space access.

The precooler heat exchanger is a vital component of Reaction Engines’ revolutionary SABRE air-breathing rocket engine and is an enabling technology for other precooled propulsion systems and a range of commercial applications.

This ground-based test achieved the highest temperature objective of the Company’s HTX testing programme and took place at its specially constructed unique facility at the Colorado Air and Space Port, United States.

During the latest series of tests, Reaction Engines’ unique precooler successfully quenched airflow temperatures in excess of 1,000°C (~1,800°F) in less than 1/20th of a second. The tests demonstrated the precooler’s ability to successfully cool airflow at speeds significantly in excess of the operational limit of any jet-engine powered aircraft in history. Mach 5 is more than twice as fast as the cruising speed of Concorde and over 50% faster than the SR-71 Blackbird aircraft – the world’s fastest jet-engine powered aircraft.

This most recent test builds upon the success of previous HTX hot tests undertaken in April which saw the precooler successfully operate at temperatures of 420ᵒC (~788ᵒF) – matching the thermal conditions corresponding to Mach 3.3 flight.

“This is a major moment in the development of a breakthrough aerospace technology which has seen Reaction Engines’ precooler tested at Mach 5 airflow temperature conditions, smashing through previous achievements at Mach 3.3 temperatures and paving the way for hypersonic flight. In addition to its use in our SABRE class of air-breathing rocket engines, there are numerous exciting commercial applications for our precooler technology, which delivers world-leading heat transfer capabilities at low weight and compact size, and we are seeing significant interest from a range of potential customers and technology partners.”

Reaction Engines’ patented precooler heat exchanger has the potential to be used in a wide range of commercial thermal management applications. These include the development of precooled systems that would significantly enhance the performance of existing jet engine technology, along with applications in automotive, aerospace, energy and industrial processes.

The major testing milestone is the culmination of 30 years of engineering innovation since Reaction Engines was founded in 1989 by three propulsion engineers from Rolls-Royce, Alan Bond, Richard Varvill and John Scott-Scott.

“This is a momentous landmark for Reaction Engines in the development of its SABRE engine, which has the potential to revolutionise both access to space and high-speed flight by powering aircraft to five times the speed of sound. The performance of our proprietary precooler technology was validated at hypersonic flight conditions and takes us closer to realising our objective of developing the first air-breathing engine capable of accelerating from zero to Mach 5.”

The HTX hot heat exchanger testing programme is a significant milestone on the roadmap to enabling transformational SABRE powered space access systems and has been keenly supported by the UK Space Agency (UKSA) and European Space Agency (ESA). In March, the two agencies reviewed and validated the preliminary design of the demonstrator engine core of SABRE, which Reaction Engines will use to undertake ground-based testing at its under-construction TF1 test facility at Westcott, Buckinghamshire, UK.

Following this significant testing milestone, the Company will embark on achieving the next steps of the SABRE programme while also pursuing nearer-term opportunities that will benefit from the addition of the Company’s heat exchanger technology.

Over the last four years, Reaction Engines has raised over £100m from public and private sources and has secured investment from BAE Systems, Rolls-Royce and Boeing HorizonX.

“The SABRE engine is one of the UK’s most exciting engineering projects which could change forever how we launch satellites into orbit and travel across the world. It’s fantastic to see Reaction Engines passing this significant milestone, which demonstrates how its precooler technology can deal with the extreme temperatures associated with travelling at five times the speed of sound. The government has invested £60 million in SABRE and is committed to taking a more strategic approach to space, developing our national capabilities to complement and expand on the UK’s leading role in the European Space Agency once we leave the EU.”