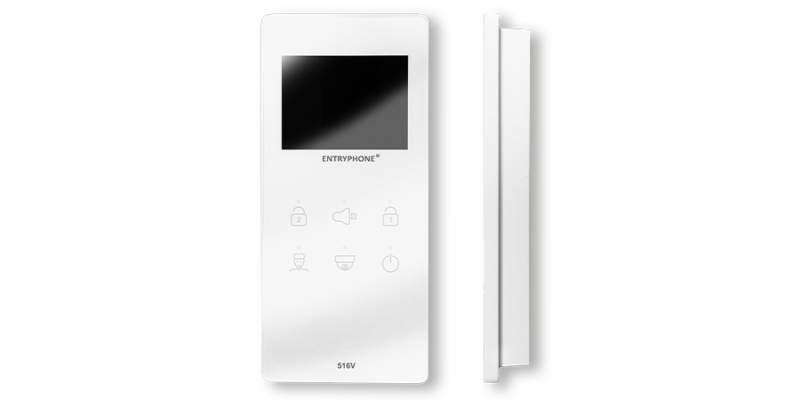 An innovative new door entry system for the smart phone generation has hit the market after a prototype developed by Protolabs went into full production.

The 516v from The Entryphone Company – launched in 2021 – has been designed as a sleek, modern wall–mounted entry phone which is ideal for high-end city-centre dwellings. It shows users a full colour image of the person at the door and boasts touchscreen controls to open the door, switch camera views or mute the caller.

Oliver Ashbee, director at 60-year-old family business Entryphone, called on Protolabs initially to help with the prototype for product before approaching the company to manufacture the casing using its injection moulding facilities.

Oliver said: “The 516v has been a couple of years in the making. After initially getting in touch with Protolabs to produce the 3D printed prototype using their stereolithography (SLA) technology, we were keen to utilise Protolabs again to quickly ramp up production with tooling and moulding for the casing.”

A standard single cavity mould was made by Protolabs and 50 sample parts were moulded and delivered to Entryphone – all within just 15 days – helping Oliver and his London-based team quickly progress with product development.

“We didn’t want to be sat around for weeks twiddling our thumbs, so getting samples back that quickly was really helpful,” added Oliver.

The final injection moulded product created for Entryphone, which will go into full production in the new year, is a white ABS polymer case, which supports the door entry phone’s glass touchscreen.

The design evolved from the original concept following feedback from Protolabs’ expert team.

Protolabs’ online quoting system takes a good look at your CAD models and gives you feedback for production. It’s an invaluable tool for companies like ours.

Matt Hatch, Protolabs’ Europe Communications Manager, said: “The Entryphone team were keen to get a high quality ABS casing injection moulded promptly so that they could get their exciting new product to market as quickly as possible. Our fast, low-volume production model was an ideal fit for their brief and we were able to get samples, with an improved design, back to Oliver within 15 days which helped keep the project momentum.

We are delighted we could be part of the development process for such an innovative idea, and hope that we have helped Entryphone to ring the changes for door entry systems.

Entryphone is a family business formed in the late 1950s as a designer, manufacturer and installer of door entry systems. The last 60 years has seen a great deal of innovation in this area and Entryphone has been at the forefront of this advancement. The company has a facility in Wandsworth where most of its products are designed and made.