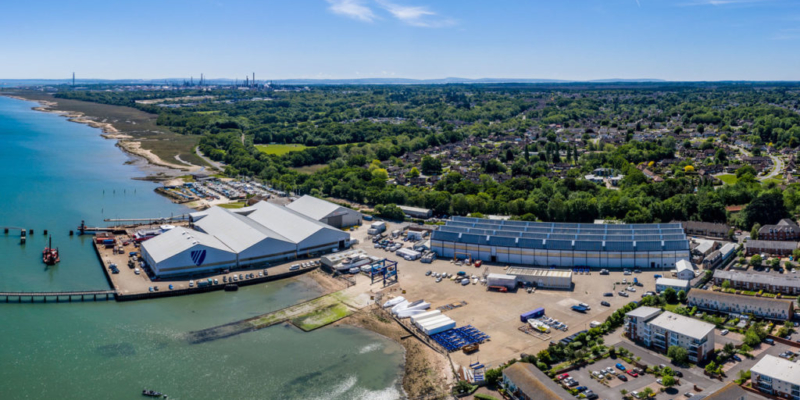 One of the UK’s iconic yacht manufacturers, Oyster Yachts, is undertaking a considerable expansion programme. The company is acquiring an additional 27,000 sq ft at the Hythe Marine Park, Southampton, which will be used to create a state-of-the-art production facility for the new Oyster 495 yacht.

Oyster’s Owner and CEO Richard Hadida says, “with several Oyster 495s already sold, investment in this dedicated production facility fits seamlessly with our growth strategy. We have great plans for Hythe Marine Park, this location is already a centre of excellence for boat building and it is the ideal location for our expansion of Oyster.”

Oyster Yachts is moving into the historic Grade II listed buildings known locally as the Admiralty Shed or the Flying Boat Hangar, which produced sea planes for World War 1, before becoming a key facility for Vickers Supermarine and later the maintenance base for the pioneering Empire flying boats. More recently, it saw the production of the test boats for the 2017 America’s Cup campaign and Alex Thompson’s 2020 Vendee Globe racing yacht.

This announcement sees Oyster Yachts increasing its existing facilities by 70%, supporting the company’s ongoing investment and growth strategy in the UK. To accommodate the expansion Oyster, will be increasing its Southampton workforce by a further 70 employees. The expansion in Hythe is seen as a positive development for new talent in the area. Awarded Employer of the Year by City College Southampton in 2021, the company is invested in developing new talent which led to the creation of its own Oyster Apprenticeship Academy. The Academy ensures time-honoured craftmanship skills and techniques are passed onto new and younger generations to ensure Great British boat building trades are sustained.

Southampton-based expansion follows on from growth at Oyster’s manufacturing facilities in Wroxham and the creation of a specialist technology centre in Ashmanhaugh, both in Norfolk.

The expansion into new premises at Hythe is being overseen by Oyster’s newly appointed Chief Operations Officer, Peter Hamlyn. Peter added “The Hythe facility will allow us to exploit production of the 495 in innovative new ways, combining new technology to complement our industry leading quality and hand-finished craftmanship for which Oyster is world renowned. This commitment is a huge boost for the local boat building community which will see further investment and job opportunities from a world class boatbuilder like Oyster Yachts.”