New analysis reveals that UK manufacturing output is worth £192bn 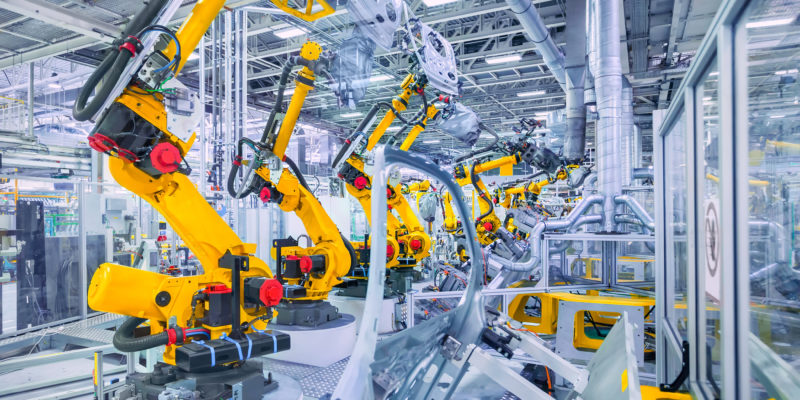 robotic arms in a car plant

According to ‘UK Manufacturing: 2019/20 The Facts’, the annual analysis of the manufacturing sector published by Make UK, the manufacturers’ organisation and Santander, whilst the United States is the single biggest export market for UK manufactured goods and services, worth £118.2bn (1), exports to the top seven EU markets alone amounted to £236.5bn in the same period (£256.1bn including Switzerland).

Broken down by sector the export picture of manufactured goods is dominated by Transport (25.5%) and Pharmaceuticals & Chemicals (17.9%) which highlight the importance of these high value-added sectors to the success of UK industry overall, the aerospace and automotive sectors in particular.

The importance of the top two dominant exporting sectors is also reflected in contributions to business R&D where pharmaceuticals and chemicals and the transport sector accounted for almost 70% of the total spend between them.

The transport sector also led the way in export growth increasing by 7.4%, largely on the back of continued growth in aerospace, closely followed by food and drink which increased exports by 5.3%.

The analysis by Make UK and Santander shows that manufacturing remains central to the success of the economy overall, accounting for two-thirds of overall R&D, 45% of exports, 15% of business investment and 2.7m high-value jobs which are better paid than the economic average. With an annual output of £192 billion, the UK remains the ninth largest manufacturing nation in the world.

The analysis smashes the myth that manufacturing jobs are badly paid with the average salary in manufacturing of £33,592, compared to £29,832 for the whole economy and way above services at £29,014.

By Region the North West is the biggest single by output, worth £28.5bn, closely followed by London and the South East worth £28.1bn.

“These figures lay bare the overwhelming importance for manufacturers of trade with our closest market and the need to avoid imposing any barriers which will make this more difficult.

“Whilst the United States remains the biggest market and, presents significant opportunities for export growth, it is a fallacy to believe that geography is not the biggest factor driving trade. For UK manufacturers access to their biggest market must be a premium.

“The figures also provide an important reminder that we’re still one of the top ten biggest manufacturing nations and we want to see policymakers working with industry to help move UK manufacturing up the rankings.”

“The UK has always punched well above its weight when it comes to exports and it’s vital this trend continues – jobs across the UK count on it.

“While we are helping businesses build strong trade links with partners around the world, the message from manufacturers is clear: Europe must remain a strong trade ally. We’ll continue to support the UK to hold its position as a major global economy and exporter.”