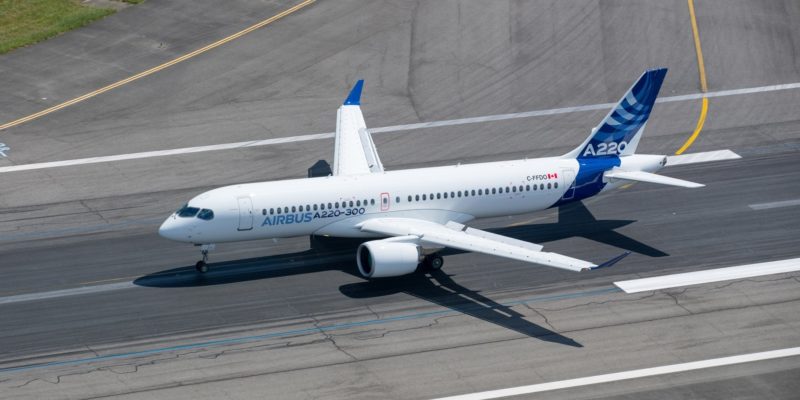 It was confirmed that the Bombardier Belfast wing facility are to be the primary source for a start-up U.S airline Moxy who have reached an agreement with Airbus to purchase a 60 A220-300 aircraft, the wings of which are created by the Belfast company Bombardier.

This is the second time in a matter of months that the company have secured a lucrative and exciting deal with an American company. In May 2018, Bombardier won a firm order from American Airlines, which was valued at $719 million and set to deliver a welcome boost in production lines at the group’s Belfast plant.

Their most recent agreement with Moxy was reached at the end of December, ending the year on a very successful note. Airbus will produce the A220 primarily at their U.S plant in Mobile, Alabama, with the construction of that plant to be located adjacent to the existing Airbus A320 assembly facility, will begin later this month.

In May 2018, Bombardier claimed that their revenue had increased by 12% to a staggering $4 billion, and with this new business partnership with Moxy, this will increase further and more than likely expand their 4,000 strong work force!

Moxy has its sights set on the future, so I can’t think of a better aircraft to put into their fleet than the A220.

We believe the A220 really is the future of this segment of the market, and the flying public will know from the minute they set foot onboard that they’re experiencing the best our industry has to offer.

Moxy’s founder David Neelman, who also founded JetBlue, said in a recent interview that the company will have no competition in any area of the flying business: –

With the A220, we bought a plane that has maximum flexibility. So we could do all of the above. Fly it short, fly it long. Fly off long runways, short runways. We want to be able to have a premium cabin. With the plane, I could do a domestic first class, I could an international lie-flat product. I could switch things out season to season. I can fly up to nine hours, which is 4,000 miles. That means I can go from the Midwest to Hawaii, I can go from the Midwest to Portugal, or I could go from Florida to any place in Brazil. I could go transcontinental, or I could fly from North Carolina to Florida. That’s what gives us the edge.

Mr Neelman seems to have a lot of confidence in this deal and a prosperous future for the company, which is very good news for Bombardier who will be in a long-term partnership with U.S giant American Airlines, and also a start-up, displaying the company’s ability to deal with businesses of all sizes and strengths.

Deals of this magnitude are sure to strengthen employment rates as the company continues to grow at an astronomical rate.