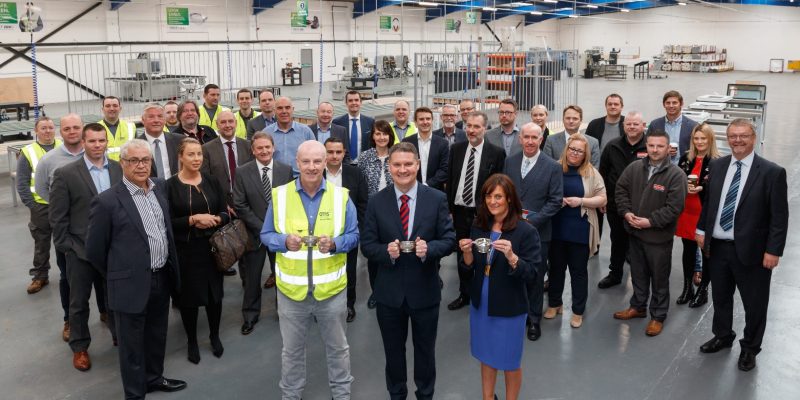 A new 25,000 sq. ft. factory has officially been opened in East Kilbride.

The investment has brought jobs and apprenticeships to the town, with an expectation of further opportunities as the business grows.

The site was officially opened by the region’s depute provost, who welcomed the window, door and curtain walling designer, manufacturer and installer to the town.

Councillor Collette Stevenson said: “I hope this is the beginning of a successful and prosperous relationship.

It is a boost for the local economy of East Kilbride, and South Lanarkshire as a whole, having CMS invest in this area and I would like to say congratulations to them on its impressive new factory and good luck for the future.

Cumbernauld-based CMS hope the investment will enable them to serve a growing demand from SMEs and sole traders in Scotland’s building sector who seek high-performance PVCu windows and doors.

New jobs have already been created, with further positions in the pipeline and a number of apprenticeships will also be provided as the business grows.

It marks an important stage in CMS’s long-term strategy, which has seen the business go from inception to a turnover of £40m and over 290 employees in just 13 years.

It is the second new production facility that the company has opened in less than 12 months, complementing its composite door factory in Kirkcaldy and its main manufacturing and recycling plant at Castlecary near Cumbernauld.

Chief executive David Ritchie said the move was a “win-win” for trade customers and East Kilbride.