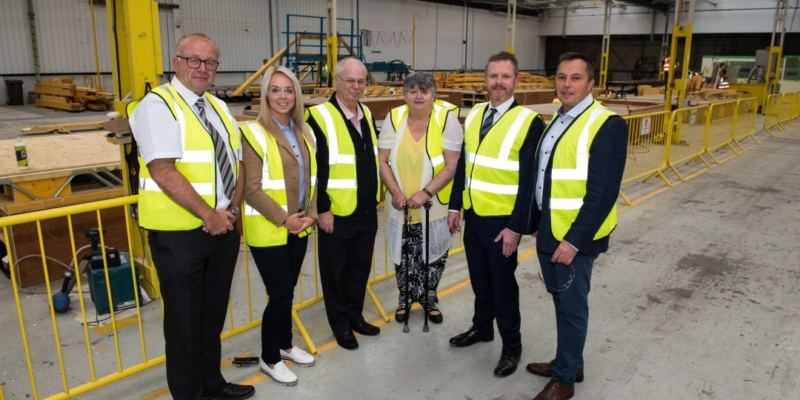 A modular construction company has revealed plans to invest £6.5m in its new facility in Neath.

Sevenoaks Modular, which was recently named as one of Insider’s Most Exciting Companies in Wales, has made the first phase of the investment totalling £500,000, creating 20 jobs at the Metal Box site.

The company, which currently employs about 100 people in Neath, anticipates it will double its workforce in the next 12 months in conjunction with its expansion to the site.

Sevenoaks Modular will acquire around half of the 80-year old site from Neath Port Talbot Council, which bought the factory in 2019.

Director Charlotte Hale said: “We are delighted to see the site up and running again and there has been a real buzz in the local community as a result.

“At present, only a small part of the site is operational but we have around 20 people employed there and one of the two large-scale cranes at the site is now working again following extensive repairs and refurbishment.

This is just the start for us. We will eventually have all our manufacturing based at the site. Our long-term plans will mean a significant investment in the local economy and allow us to keep pace with demand and all while pushing an environmentally friendly agenda, both in terms of the style of construction we champion and in terms of how we will regenerate the site itself.

The Metal Box factory site was occupied for more than 70 years by the Metal Box container factory known locally as “The Box” but has been vacant after the previous occupiers, the Crown packaging company, closed in 2016.

In a joint statement, councillors for Neath Port Talbot, John and Sandra Miller, added: “When the Metal Box closed I don’t think anyone expected to see its doors open again. After our guided tour of the facility this morning it is easy to become hopeful again.

“This is an exciting development which highlights a company who are able to adapt and utilise the space available to them.

“Although this morning’s tour was only to the first phase, we were extremely impressed by what we saw and with the plans for expanding into the next phase.

“We were given a full account of the vision of the company and the intention of those driving the project. We look forward to seeing this local company going from strength to strength.”