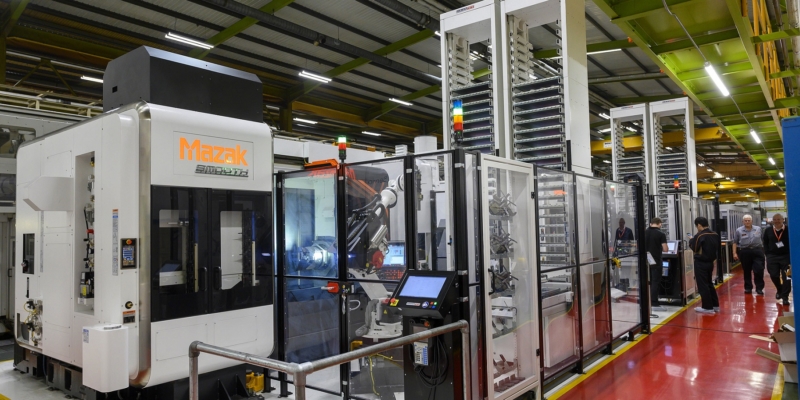 Yamazaki Mazak has made a series of major investments at its UK-based European manufacturing plant in Worcester.

Specifically, the RoboJob Tower automation system is designed to deliver extended periods of unmanned running from a small footprint. The 4.6m-high tower system is equipped with twin-elevator storage trays, with one feeding a robot for transferring workpieces to the machine tool, while the other allows the operator to replenish parts.

In addition, a VTC-800 series machine has been installed in the jig boring area of the company’s manufacturing facility and the case paint area has been moved to increase the assembly space on the factory floor. An extension has also been added to the factory, creating more floor space for the building of new machines.

Mazak’s Worcester facility is its European headquarters and only manufacturing site on the continent, producing more than 1,000 machine tools every year, with more than 80% exported to mainland Europe.

Speaking to the media at the recent EMO Hannover 2019 trade show, Mr Takashi Yamazaki, President of Yamazaki Mazak, also confirmed that the Worcester facility would be upgraded to iSMART Factory™ status, the company’s highest level of Industry 4.0 connectivity, in line with its other plants in Japan and Kentucky in the United States.

Richard Smith, European Group Managing Director, commented: “Our Worcester facility has always been at the forefront of manufacturing innovation as we strive to become even more productive and efficient. The new investments are a clear illustration of our dedication to manufacturing excellence and continued commitment to manufacturing in Europe. The proposed upgrade to iSMART Factory™ status will bring further improvements and ensure that the facility remains in the front rank of Mazak’s global manufacturing footprint.”