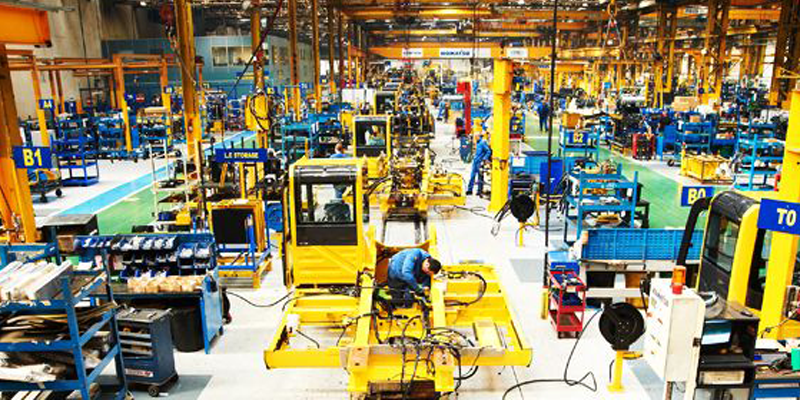 Komatsu UK (KUK)  has created more than 120 jobs and apprenticeships at its Birtley plant in Country Durham after winning a raft of new orders.

The world’s second largest construction and mining equipment manufacturer, celebrating its centenary this year, is expanding its North East workforce and ramping up production to meet increasing domestic and international demand.

The company has also promoted Stephen Callaghan to the role of Production Control Manager, making him the third former apprentice to secure a management position at the company, which has been based at Birtley for 34 years.

Stephen, joined the company in 1997, serving a four-year apprenticeship before moving into the fabrication team, operating the welding robots. He then spent time as a planning engineer before gaining a promotion to become a senior engineer in production control until this year when he was welcomed into management at the plant, following in the footsteps of David Newton and Michael Redshaw, the first and second apprentices to secure management roles at Birtley.

Stephen Callaghan said: “KUK has a great ethos of succession planning. We genuinely believe in and promote development. Everyone is aware that if you demonstrate ability, drive and determination, Komatsu provides opportunities for every employee to develop.

“I began my Komatsu career as a raw 16-year-old apprentice, but always recognised the opportunity that working somewhere like Komatsu offered. The business apprenticeship programme is full of amazing success stories and countless former apprentices have gone on to forge long, successful careers here, with many progressing to senior positions.

“It certainly helped me, in a well-structured way, transition from full-time education into a work-placed environment. Through great mentorship and training, I was able to learn the skills required to start a career in engineering and always have a career path ahead of me to keep me motivated.”

The company’s new cohort of 10 apprentices will be hoping to emulate Stephen’s success, as they settle into the KUK Apprenticeship Scheme, which will see them  develop the knowledge, skills and behaviours required to succeed at Komatsu.

Paul Blanchard, KUK Managing Director, said: “I’d like to congratulate Stephen on his well-earned promotion. His skill, determination and knowledge is formidable and an inspiration to others.

“We take pride in the way we invest in the development of employees and Stephen is a great example of someone who has seized every opportunity that came his way. “I’d also like to welcome our new apprentices and the new employees we have recruited across the plant and look forward to working with them to sustain Komatsu’s continued success and growth.”

Komatsu Group, celebrating its centenary this year, employs around 63,000 people and is the world’s second largest manufacturer of construction and mining equipment.

Komatsu UK has produced excavators since opening the plant in 1987. Originally creating 250 high quality manufacturing and engineering roles, Komatsu was at the forefront of the creation of a whole new industry in the North East that centred around automotive and construction equipment manufacturing.