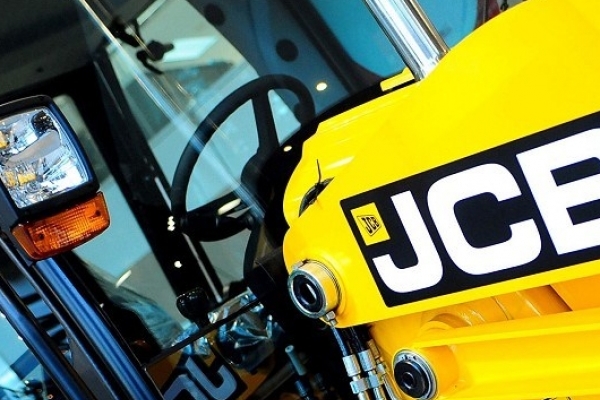 The Countess of Wessex, Patron of the NSPCC, was warmly welcomed to JCB today for a double engagement – to officially open a new £100 million factory and to receive a £300,000 cheque for the children’s charity.

The Countess visited JCB Cab Systems, Uttoxeter, and during a tour, Her Royal Highness was given an insight into the hi-tech manufacturing plant complete with its computer-controlled production line and rainwater harvesting and heat capture systems. Her Royal Highness later received a cheque for £300,000 for the NSPCC after a successful employee fundraising campaign.

JCB Chairman Anthony Bamford and his wife Carole welcomed The Countess to the plant and during the visit Her Royal Highness unveiled a plaque on the shop floor to the applause of hundreds of employees who had gathered to watch the occasion.

Lord Bamford said: “Britain, and Staffordshire, is a great place to manufacture and investing in Britain is something we will continue to do. Investing in this plant has, quite literally transformed our cab production business, bringing new levels of efficiency to our operations.”

The Countess of Wessex met employees on the shop floor including Ben Emery, who joined JCB in 2006 as a Mechanical Engineering Apprentice. He now works as a Manufacturing Engineering Manager at the factory and led the team that bought all the key equipment for the new plant. He gave Her Royal Highness an insight into the manufacturing processes at the site.

Ben, 32, of Burton-on-Trent, said: “It was fantastic to meet The Countess of Wessex and the whole team is very proud to have been able to show off our hi-tech workplace to a member of the Royal Family. She was very interested in everything we have done to make this a world class, efficient manufacturing facility which competes with the best in the world.”

Following the official opening, The Countess, attended a celebration to mark the culmination of JCB’s latest appeal for the children’s charity, which the Bamford Charitable Trust has supported for almost 40 years. Her Royal Highness met more than 50 employees from all over JCB who have played key roles in the JCB NSPCC Platinum Jubilee Appeal, which was launched in 2021 with a target of £70,000. Employees smashed through the goal – raising £150,000.

The Countess was presented with a cheque for £300,000 by Lady Bamford – after The Bamford Charitable Trust doubled the amount raised by employees. As she handed over the cheque Lady Bamford paid tribute to everyone involved in the Appeal.

Commenting on the presentation and official opening of the new plant, HRH The Countess of Wessex, Patron of the NSPCC, said:

“JCB is a family business with family values, and it is those family values which have seen so many successful NSPCC appeals staged over the years.

“JCB’s roots in Staffordshire are very deep, just like those of the many thousands of families who work here. There is so much more work to do to end child cruelty, which is why it is so important to us to support the work of the NSPCC in a way which directly benefits the children of this county.”

An NSPCC spokesperson said: “We would like to thank JCB for their fantastic efforts during the Platinum Jubilee campaign. We are extremely grateful that JCB has chosen to donate the funds raised to the NSPCC and support our vital work with children and families in Staffordshire.”

A group of 10 JCB employees started the appeal ball rolling with a 129-mile coast-to-coast cycle ride from Barrow-in-Furness to Tynemouth. A team of 36 apprentices also built a one-off electric Loadall telescopic handler from scratch and gave it a distinctive vinyl wrap using the handprints of children from two Stoke-on-Trent schools: The Ormiston Horizon Academy and St Margaret Ward Catholic Academy.

The machine has now been bought by UK plant hire company VP Plc. Other fundraising events included the ‘JCB Sportive’, a bike ride organised by the JCB Cycling Club which saw 250 cyclists ride either 70 miles or 70 kilometres for the appeal in the summer – a mile or kilometre for every year of Her Majesty’s reign. George Bamford, who is Honorary President of the JCB Cycling Club, also took part in the ride which raised £10,000.