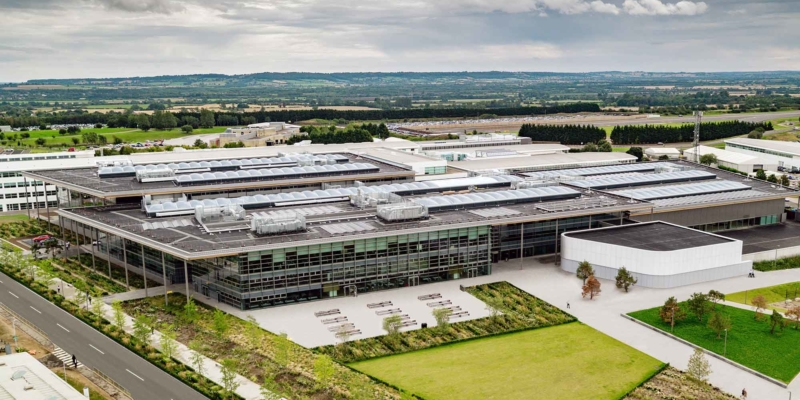 Jaguar Land Rover delivered a £500m vote of confidence in Britain as it opened the UK’s biggest state-of-the-art centre for designing and creating its cars of the future – including electric vehicles and those with self-drive features.

In the face of Brexit uncertainty, Jaguar Land Rover chief executive Prof Sir Ralf Speth opened the massive new complex where engineers will work together to plan its next-generation models and accelerate the firm well into the 21st century.

That includes a new ‘green’ flagship zero-emissions all-electric XJ limousine, as favoured by Prime Ministers and captains of industry.

It is designed to encourage collaboration throughout the entire process of vehicle development – from the first outline sketch to the finished car in the showroom.

This includes a brand new Jaguar design studio which joins a similar Land Rover studio already based there.

Nearly 13,000 highly-skilled engineers and designers are now based at the site built on a former military airfield at Gaydon in Warwickshire.

JLR said they are ‘developing the current and next generation Jaguar and Land Rover vehicles’ as well as ‘creating future autonomous, connected, electrified and shared mobility technologies’ that will help secure Jaguar Land Rover’s long-term growth and future.

This includes the new flagship all-electric Jaguar XJ limousine, ‘teaser’ pictures of which have been leaked by JLR, with more likely to be made public.

JLR stressed: ‘Today’s opening at Gaydon follows confirmation of the company’s plans to transform its Castle Bromwich facility into the UK’s first premium electrified plant where a range of new electrified vehicles will be manufactured, starting with the next generation Jaguar XJ.’

‘Jaguar Land Rover is on track to deliver its commitment to offer customers electrified options for all new Jaguar and Land Rover models from 2020. ‘

Sir Ralf himself, speaking at the opening event, said: ‘Megatrends like urbanisation and sustainability are fundamentally changing the automotive industry.

‘At Jaguar Land Rover, we not only participate – we are shaping future mobility. Our vision is for a world in which zero emission vehicles, public transport and self-driving pods will form one smart integrated and networked transport system.

‘At Gaydon, we have invested into the future and an inspiring environment for our people.

‘We have created the prerequisites that Gaydon can design and engineer the next generations of outstanding cars in highest quality. We have consciously invested with a ‘Destination Zero’ attitude.’