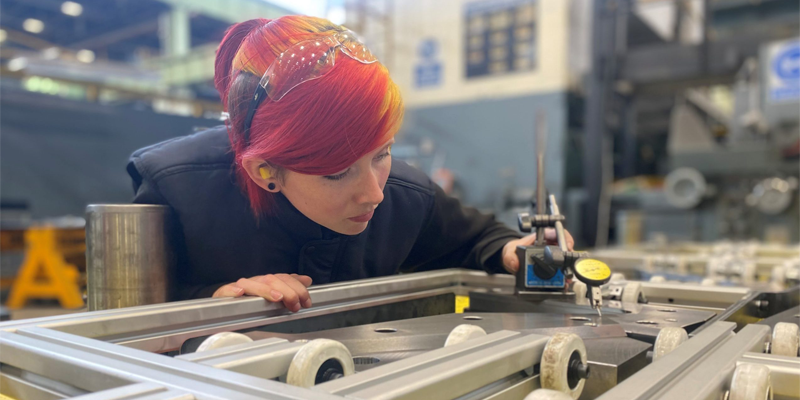 Jaguar Land Rover has started manufacturing its own press tools in-house for the first time following a £1.7m investment at its Halewood plant.

The company had previously outsourced the production of its press tools, so this will allow it to drive efficiency and quality, as well as give employees the opportunity to learn new skills, to build and operate these tools.

The investment involves the installation of a new Press Die Manufacturing Centre – the first of its kind in Jaguar Land Rover, with a state-of-the-art five-axis milling machine, which manufactures press tools – known as blanking dies – from raw castings. The blanking dies are the first stage in the manufacture of car body panels, during new vehicle production.

“This investment has given the tooling workforce a real boost as we are doing things we didn’t think we would ever get to do at Halewood. This is the last year of my apprenticeship so it’s brilliant to see what the future has in store for the team. It’s also exciting for the new apprentices joining the company this month. They probably never expected to be making the tools themselves.”

Progress is well under way at the new centre with the factory producing pressed parts for future Jaguar and Land Rover models, across its sites globally.

Jaguar Land Rover’s Halewood facilities will also be upgraded to enable the production of fully electric vehicles, as part of its new global Reimagine strategy, as the company drives forward with the electrification of both Jaguar and Land Rover brands.

The announcement of our Reimagine strategy and now the opening of the new Die Manufacturing Centre highlights the continued investment in our factory – so there’s a bright and exciting future for Halewood and the Merseyside region.

“The manufacturing of raw cast iron press tools is great news for us as we have never done this in-house before”, explains Niall Ford, Stamping and Press Parts Group Manager. “It shows huge confidence, not just in our Halewood factory, but also in our people who will be building these tools.

“For the first time, our workforce and apprentices will be trained in the new processes and skills required to build and operate dies, which means we attract and keep the best talent at Halewood.”

Jaguar Land Rover is one of the UK’s largest car manufacturers, and its Halewood plant employs 3,700 people directly, supporting a further 1,000 people indirectly through its suppliers and contractors.