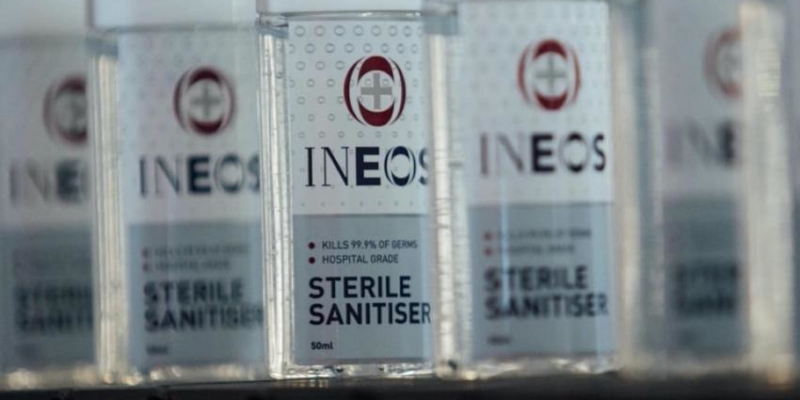 INEOS, one of the world’s largest manufacturing companies, has today announced the launch of its new global healthcare business, INEOS Hygienics.

The new business will produce a range of hospital grade hand gels, sanitiser sprays for hands and surfaces and sanitiser wipes, for retail sale, available for the home and to the public.

It will be headquartered in the UK and operate manufacturing plants at Newton Aycliffe in the UK, Herne in Germany, Etain in France and at Jacksonville and Neville Island in the USA.

George Ratcliffe, Chief Operating Officer of INEOS Hygienics, says, “To date, we’ve delivered more than four million bottles of sanitiser to hospitals around the world, bringing confidence to thousands of frontline medical staff and care providers. Now, we’re able to offer that same level of protection to the public.  INEOS sanitiser products will now help us all to target viruses and bacteria with confidence at home, at work and beyond.”

INEOS have a long-standing history of producing the purest most effective sanitising agent, which is pharmaceutical grade alcohol. In contrast to other suppliers INEOS Hygienics will formulate its sanitisers with 75% alcohol as advised by The World Health Organization, The US FDA, and European health services.  Nothing is added which is not needed to kill infection. This ensures that it is effective in eliminating 99.9% of viruses and bacteria.

The launch of the INEOS Hygienics business is being announced at the British Grand Prix weekend and is supported by six-time double world champions, Mercedes-AMG Petronas Formula One Team.

Toto Wolff, Team Principal & CEO of the Mercedes F1 team, is delighted to have the backing of INEOS Hygienics and to be back racing at Silverstone.

Toto says, It is fantastic that we’re back racing and it’s only possible due to the stringent protocol measures that are in place across sport, including team members prioritising hygiene. The INEOS Hygienics range of medical grade sanitisers is helping to protect the team, giving us confidence to get the job done at the factory and on the track. The innovation and adaptation that INEOS has demonstrated in its response to the pandemic have been impressive and we’re proud to be carrying the INEOS Hygienics name on the car at Silverstone and for the next races.

Team INEOS were actively involved in distributing INEOS hand gels to hospitals during the crisis and all still use the products to ensure cleanliness remains a top priority.

Sir Dave Brailsford says, Minimising the risk of avoidable illness is key to success in sport. Consequently over the last ten years Team INEOS has developed a unique hygiene programme to protect our riders and staff. It has now become critical for everyone in every part of life – from sport and school to the workplace and home. Through INEOS Hygienics and state of the art products we are taking this same expert knowledge to help equip the public in their fight against infection.

INEOS is Europe’s largest producer of ultra-high purity ethanol and isopropyl alcohol (IPA) which are the two main ingredients used in sanitiser products. It is the only company in the world that can produce and supply this medical grade direct to consumers.

Supply to Amazon as well as pharmacies, wholesalers and supermarkets is now starting across the UK and Germany, with France and the USA following shortly.

George Ratcliffe adds, COVID-19 has made everyone more aware of the importance of hygiene and the need for effective sanitising products. INEOS Hygienics is determined to ensure our products are available to meet the increased demand around the world. As a new and quickly evolving hygiene business, we will be able to meet the demands of both consumers and businesses as we all adapt to the new demands for hygiene against Corona and other viruses.