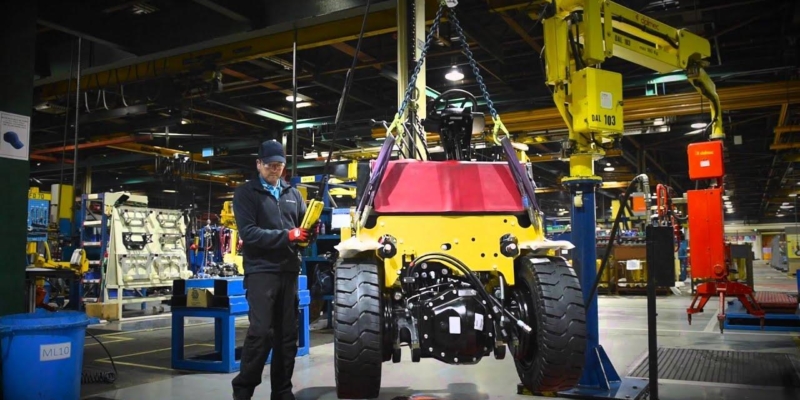 American-owned forklift manufacturer Hyster-Yale is creating dozens of jobs in Co Armagh following a £5 million expansion of its Craigavon plant.

The Ohio-headquartered group, which already employs hundreds of people at the 40-acre site, announced the new jobs as it officially unveiled the new 60,000 sq ft facility.

The factory extension will be known as the Sands Building, in honour of Harry Sands, former Senior VP and Managing Director, EMEA, for Hyster-Yale Group based in Craigavon, who retired in 2020 after 40 years with the company.

It has been built with environmental specifications and ambitious objectives in mind. For instance, it incorporates a completely new approach to lighting which harnesses more natural light, decreasing electricity consumption and reducing CO2 emissions. A biomethane fuelled plant on the site will also be used to provide 80% of the electrical power required, with the heat by-product also used on site.

“The success of our plant at Craigavon is driven by our people, where we see incredible dedication, perseverance, and loyalty from the team at all levels, with an average length of service of 17 years,” says Jim Downey, Plant Manager for Hyster-Yale Group EMEA in Craigavon. “Over the last four decades, our people have worked together to conquer challenges, embrace new opportunities, and maintain forward momentum, and that is why our facility continues to succeed, evolve, and grow.”

The opening also marked the 40th anniversary of the manufacturing facility in Craigavon. The facility, which was officially opened on 7th April 1981, was built and equipped with the most up-to-date robot systems and equipment. Over the years the plant has grown to be the largest volume forklift plant in the UK, manufacturing thousands of electric, diesel, and LPG forklifts each year for export throughout Europe, the Middle East and Africa.