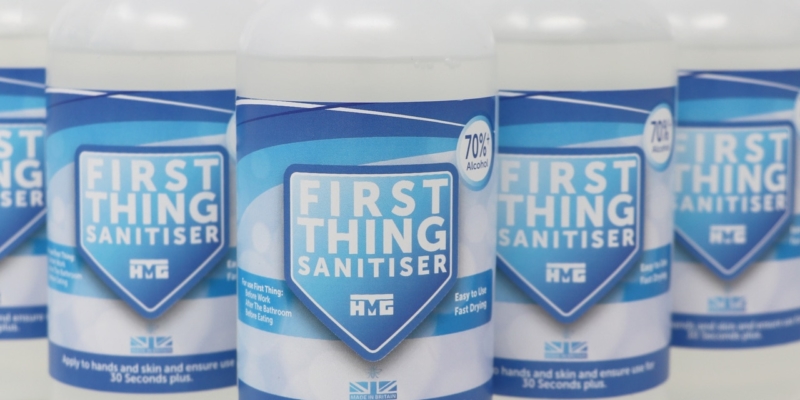 The UK’s largest independent coatings manufacturer, HMG Paints Ltd has utilised its manufacturing knowledge and existing alcohol stocks to produce hand sanitiser, for local front-line workers, care providers and charities. The company developed the First Thing Sanitiser, which contains over 70% alcohol, after staff and their families reported being unable to find stocks at other locations. The First Thing name derives from internal communication messages urging staff to make washing their hands the first thing on their mind whether in work or at home.

The company is now working with partners to supply hand sanitisers, based on a World Health Organisation recommended formulations, to those who need it the most during the spread of Covid-19, which has led to a national shortage. With a severe shortage for those working in environments with those most vulnerable (care homes, the homeless, charities etc) HMG is keen to help as many get the supplies that are needed.

“Our team of chemists have worked extremely hard on the formulation and it has been a true team effort to make the hand sanitiser available.” Said John Falder, Managing Director. “By utilising our existing alcohol stocks, we believe that we can help the HMG Family, our customers and those who need it the most during the current shortages.“

The first batch of First Thing Sanitiser saw donations made to Greater Manchester Police along with local care homes and frontline workers. The current situation in the UK has seen a number of HMG’s customers assist with Government and NHS Infrastructure support initiatives utilising their skills and expertise to help during the current outbreak. The company intends to manufacture as much hand sanitiser as possible and set aside a number of sanitisers to donate to front line workers and others most in need during the crisis.

The paints made by HMG Paints are also being utilised during the current crisis with their coatings being used on everything from hospital beds, workbenches, communication equipment and buildings to the trucks and commercial vehicles keeping goods moving across the country. The Sales Order office is contactable via calling 0161 205 7631 or emailing sales@hmgpaint.com.

If you would like information on the sanitiser, which is available in 250ml bottles, please email sales@hmgpaint.com. Priority will be given to essential services to critical industries such as pharmaceutical packaging/health/ transport/utilities/defence throughout the current situation. However, the company have capacity to support anyone who is still in need of sanitiser supplies.