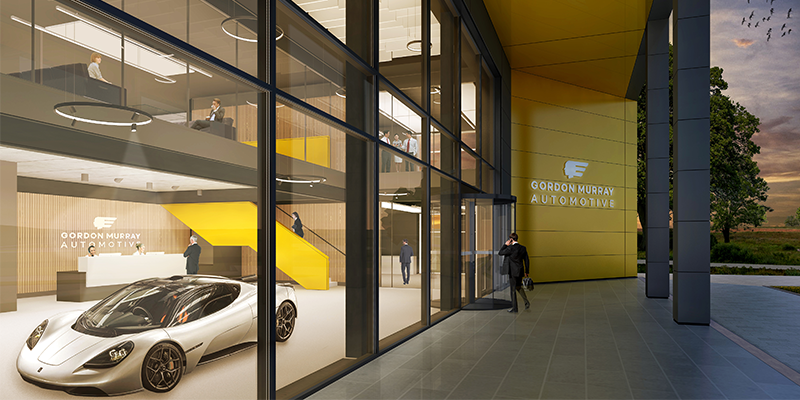 Gordon Murray Group has had the planning application approved to build a new global headquarters and technology campus in Windlesham, Surrey, UK, it has been announced.

Surrey Heath Borough Council has unanimously approved the Gordon Murray Group planning application, and the Ministry of Housing, Communities and Local Government is in full support off the Council’s decision to grant the new £50M campus which will be built on a 54-acre site, housing state-of-the-art facilities for vehicle design, development, advanced engineering and manufacture. The 140,000 sq. ft. development will see the creation of 100 highly-skilled jobs.

Planning approval has paved the way for the three-year construction project to begin on the historic site in June. The first phase is expected to be completed by December 2022 and will be the first of three buildings, housing the manufacturing facility, a customer sales suite, servicing and a heritage vehicle display. A test track to check all vehicles coming off of the production line is also planned. Two further phases will follow and the whole site is expected to be completed by 2024.

Professor Gordon Murray CBE, Chairman, Gordon Murray Group: “We are delighted to have been granted planning permission for our new headquarters. This facility has been in the design and planning phase for over three years, with many obstacles to overcome, so it’s extremely exciting that we have now been given the green light to begin construction.

“The Windlesham park must be one of the most beautiful settings for any automotive group and it will be a fantastic new home for the Gordon Murray Group family and a great campus for our customers to visit.

“This significant investment marks a new chapter for our business. This will be a world-class facility, attracting world-class talent and we intend it to be something that the British automotive industry can be proud of as we gather momentum for even greater success.”

The new headquarters and technology campus will be named Highams Park in memory of the site’s historic significance. It was farmed in the 18th century, before being used for Highams Hall, the private residence of the Leschalles family. From 1984 to 2007 it was the site of BOC’s global headquarters and was acquired by the Gordon Murray Group in 2020.

The Gordon Murray Group is ensuring that the historic buildings and 54-acre park land are retained, preserved and enhanced. Restoration work has already commenced on the North side of the site where original buildings are being renovated, including a locally listed 19th century clock tower and its original mechanism. The Group is also committed to planting 112 new trees and returning the Victorian gardens and paths to their former glory.

Professor Gordon Murray CBE, Chairman, Gordon Murray Group: “This is an historic site and maintaining its original characteristics is important to me personally and something that we are paying a great deal of attention to. I have lived and worked in the area for over 50 years, so I also know the importance of integrating into the local community. Rest assured, this site will continue to play an active role, including continuing to support the annual Windlesham Pram Race which has been running since 1968.”