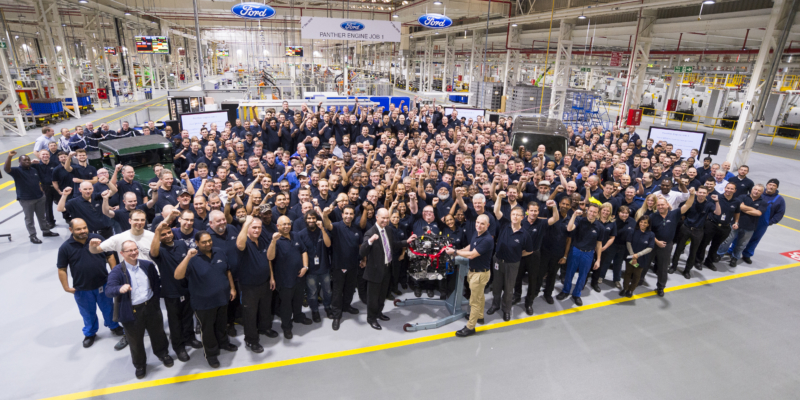 Just over 90 years ago, at 1:16pm on October 1, 1931, the first Ford vehicle rolled off the production line at what was then Ford’s newest global production facility, Ford Dagenham.

Nine decades later – with nearly 11 million cars, trucks and tractors built during 71 years of vehicle production which, if placed end to end, would stretch more than 400,000km or 10 times around the world, and close to 50 million engines produced to date – Dagenham continues to play a major role in Ford’s European operations, building the advanced technology diesel engines that power many of Ford’s passenger and commercial vehicles.

“Today is about celebrating with our employees the enormous contribution they and their predecessors have made over many generations to the success of Ford Dagenham,” said Kieran Cahill, chairman, Ford Motor Company Limited and vice president, Manufacturing Ford of Europe, speaking at a Ford employee event at Ford Dagenham today.

“Still London’s largest manufacturing site, the fact that Ford Dagenham continues to be such an important part of our European manufacturing operations is testament to our employees’ involvement in the site’s past, present and future.”

Ford Dagenham was confirmed in March of this year as the source of the latest advanced technology diesel engines for the next generation Ford Transit Custom range which will be built by Ford Otosan – Ford’s Turkish joint venture – in Kocaeli, Turkey, from early 2023. The next generation Volkswagen 1-tonne commercial vehicle also will be built in Kocaeli as part of the Ford-Volkswagen Alliance.

“The anticipated incremental engine volumes this creates is expected to help safeguard jobs at Ford Dagenham. By 2025, we anticipate that up to 60 percent of our entire diesel engine volume will be destined just for the 1-tonne commercial vehicles being built by Ford Otosan,” said Martin Everitt, plant manager, Ford Dagenham.

Ford also announced earlier this year that Ford Dagenham will supply the diesel engine for a new light commercial vehicle to be manufactured at Ford’s Craiova facility in Romania from 2023.

In addition to diesel engine manufacturing, Ford Dagenham is also home to Ford’s Transport Operations which is responsible for the transport logistics of Ford components and vehicles across the U.K., and to a number of other functions, including Information Technology.

“Engines, Cars, Trucks, Tractors & Ventilators. What immediately comes to mind when I think of the 90 years anniversary, are the generations of families that have contributed to making this such a fantastic facility and helping us arrive at this milestone. All these people’s contributions over the years has been our true strength in Dagenham,” said Jason Brandon, Convenor, Dagenham Engine Plant.

“They have proven over and over again, both their versatility and their ability to rise to any challenge and when necessary diversify into other areas of manufacturing. We can do anything in Dagenham and I’m sure, notwithstanding the ongoing challenges for the internal combustion engine in the near future, we can secure future Ford opportunities in manufacturing and alternative sectors and give more generations of Ford families the opportunity to work for this great Company.“

“It is awesome to look back at how Dagenham has diversified over the years, making varied world leading products. All employees, past and present, should feel proud of what they have achieved. Looking to the future we have all the right ingredients for success, the most important ingredient being our employees who are motivated and dedicated to taking Dagenham forward into the world of electrified vehicles,” said Debbie Dempsey, Transport Operations Salaried Representative, Dagenham.

Dagenham – new opportunities and a gateway to the UK and beyond

From 1931 to 2002, Ford Dagenham built some of Ford’s most iconic European vehicles, from the Model Y to the Anglia, and the Zephyr to the Fiesta. Engine manufacturing also has been integral to Ford Dagenham since its earliest days, and while diesel engine production will remain the mainstay of Ford manufacturing operations at Dagenham in the years ahead, Ford also is looking at other opportunities across the Ford Dagenham site.

Announced in late June, the Ford Venari Alliance brings together Ford, the UK market leader in commercial vehicles and Venari, the UK’s largest emergency service vehicle provider, in plans to manufacture the all-new, lightweight front-line ambulance – unveiled by Ford and Venari earlier this year. Based on the Ford Transit chassis cab and developed under “Project Siren”, the lightweight ambulance was designed with input from industry experts and front-line medical teams.

The Ford Venari Ambulance is intended to be produced at a new facility in Ford Dagenham from 2022, utilising an existing, non-production location that will be refreshed to accommodate its manufacturing requirements. It is anticipated that the new business will create around 100 new jobs once production begins in 2022.

Ford and MS-RT, the Ford Pro commercial vehicles conversion partner and design-led automotive engineering company that creates specialised Ford vehicles that stand out on the road, also have announced that MS-RT is to establish a new £4 million vehicle conversion facility at Ford Dagenham.

The new Dagenham facility is intended to provide work for more than 50 new employees when it comes online in 2022, rising to over 120 new jobs when fully operational, helping in the regeneration of one of the UK’s most deprived areas, and is needed due to increasing customer demand for the company’s vehicle conversions both in the U.K. and in a number of European markets.

Thames Freeport – 1,700 acres of development land at the heart of Europe’s largest consumer market – connects Ford Dagenham to the ports at London Gateway and Tilbury. The Thames Freeport consortium partners, Ford, DP World London Gateway, and Port of Tilbury are working collaboratively with local authorities, and other public sector bodies such as the Thames Estuary Growth Board (TEGB), Port of London Authority (the PLA) and the South East LEP (SELEP), to catalyse investment opportunities along this strategic corridor, unleashing huge potential for local regeneration, sustainable and inclusive growth.

The Freeport has good onward road, rail and marine connections, alongside well-honed investment promotion, trade facilitation, skills development and automation services. It also is targeting green-tech growth, including future mobility solutions, supported by an Innovation Hub and local authorities committed to economic growth, and cements the Thames Estuary as the UK’s global gateway for trade

In 2020, Ford was part of the VentilatorChallengeUK consortium which manufactured much needed respiratory ventilators for the National Health Service. Ford transformed an empty warehouse into an ISO 9001-accredited ventilator sub-assembly manufacturing facility in just three weeks – a feat that would usually take a full year. This involved both the Dagenham and wider Ford team, in conjunction with the local community, coming together in challenging times to build, launch and staff the facility with up to five hundred people a day at peak production.

In addition to its role in building the most complex ventilator sub-assemblies, Ford also played the pivotal role in helping to industrialise the production process of the ventilators to enable them to be built in large scale – just as Henry Ford’s moving assembly line led to mass production in the car industry in 1908 with the Model T.

Ford of Britain has been sales leader in the U.K. for passenger vehicles and commercial vehicles for 44 and 55 consecutive years respectively, with Fiesta being the country’s top-selling vehicle the last 12 years. The U.K. is Ford’s third-largest global market, accounting for around 30 percent of Ford total vehicle sales in Europe. Ford is going “all-in” on electrification, with its passenger vehicle range moving to all-electric by 2030. Ford directly employs around 7,000 people in the U.K., with thousands more employed in its extensive dealer network. The Ford Britain Dunton Campus in Essex is the home of Ford’s European commercial vehicle business group, the Ford of Britain national sales company, Ford’s banking arm – Ford Credit Europe – and powertrain engineering. Around 85 percent of engines and all transmissions built in the U.K. are exported to more than 15 countries on six continents. Total value of Ford exports is around £2.5 billion annually.