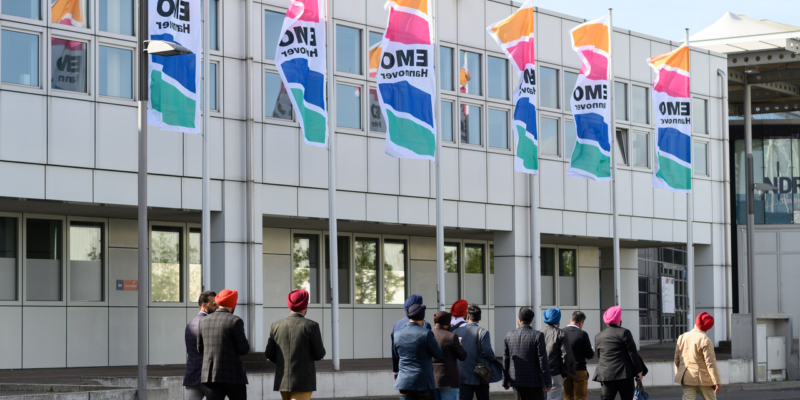 Hannover, 21 September 2019. EMO Hannover 2019 closed its doors today following a six-day run. From 16 to 21 September, round about 117,000 production specialists from 150 countries convened at the world’s leading tradeshow for the metalworking industry. “This EMO Hannover 2019 built on the success of our boom year in 2017,” reported EMO General Commissioner Carl Martin Welcker. He continued: “In the context of subdued economic expectations over the past several months, the moderate decline in attendance has to be viewed as a success. We are particularly delighted at the further increase in the percentage of foreign attendees.” The mood in the halls was positive, with many exhibitors pleasantly surprised at the high volume of visitor traffic at their stands. “EMO Hannover has once again proved solid as a rock, providing clarity for the further development of production technology, even in uncertain times,” Welcker added. Its trademarks included a strong international character, a high caliber of visitors and exhibitors, and an amazing wealth of innovations and new products, he stressed. As the world’s leading metalworking fair, it was the “place to be”.

Exhibitors with a broad customer base were satisfied with the run of the fair. In the words of Dr. Wolfgang Heuring, CEO of the Erlangen-based Motion Control Business Unit at Siemens: “The level of visitor interest at our stand this year was incredible. We are delighted at the way things have gone.” Other firms with a stronger focus on the passenger car industry seemed to be less upbeat about the situation. “Firms are clearly more reluctant to commit themselves, given the general uncertainty over where the market is heading,” remarked Dr. Christian Lang, CEO of Liebherr-Verzahntechnik in Kempten. “But our discussions with customers at our stand have still been substantive and very promising for the future,” he added. While some exhibitors spoke of a historic paradigm shift in the automotive industry, which still needed to be mastered, other exhibitors reported successfully negotiating business deals with automakers during the fair.

At the start of EMO Hannover, there was some worry about the news that many customers were cutting their travel budgets. Yet the percentage of company executives among tradeshow attendees was about as high as two years ago, at 58 percent. Around half of these came armed with capital investment plans, and for foreign visitors, this figure was even higher, at more than 62 percent. 25 percent of attendees actually placed orders during the fair or planned to do so in the near future. And a further 20 percent intended to spend money downstream from the fair. “We’ve had a lot of discussions focusing on specific customer requirements. Many users are carefully considering which capital expenditures they need to best position themselves for the future,” said Matthias Funk, CEO of Hedelius Vertriebsgesellschaft in Meppen.

The main focus was on expansion and replacement investments in flexible manufacturing, production machines, tools and automation. “First we need to find out what is happening in the industry, then we will make our investment decisions after EMO is over,” says Kiyokazu Sugiyama of Nissan Motor Co. Ltd., Yokohama, after spending three days at the fair taking a close look at all the displays. Gebhard Debor, manufacturing manager at Linde Hydraulics in Aschaffenburg, commented: “If we find what we’re looking for, we’re ready to talk business right now.”

As the flagship fair for its sector of industry, EMO Hannover has a strong international profile. More than half of all attendees came from abroad, split almost evenly between other European countries and overseas. A 20 percent growth in attendance from overseas in comparison with the 2017 event was particularly impressive. This included a high percentage of Asian guests, who accounted for almost one third of visitors from abroad, with China, Japan, Taiwan and India heading the rankings. “The highly international makeup of EMO visitors, particularly from Asia, resulted in a busy and extremely global atmosphere at our stand,” said Dr. Stefan Brand, CEO of Vollmer Werke in Biberach. This trend was clearly related to a higher number of Asian exhibitors at this year’s event, who encouraged their customers to visit them in Hannover. Other countries with strong representation at the event included Italy, Poland, Sweden, Russia and Turkey.

“This year’s EMO once again generated fresh momentum for innovations,” reported Lothar Horn, Managing Director of Paul Horn GmbH in Tübingen. As an innovations platform for production technology, EMO is expected to chart the trends for the years ahead, and once again the mission was successful. The EMO motto “Smart technologies driving tomorrow’s production” accurately reflected the key issues facing the industry today. “Our many discussions with customers at EMO 2019 in Hannover revealed that a focus on the holistic process chain, including digital services, creates the relevant added value for customers,” said Christian Thönes, Chairman of the Executive Board at Bielefeld-based DMG Mori AG. This feeling was shared across all exhibitor segments. “The positive visitor response to our cloud-based simulation tools and monitoring system as an Industry 4.0 application was striking,” commented Marie-Sophie Maier-Wember, CEO of Haas Schleifmaschinen GmbH in Trossingen. And the buzzwords of IoT platforms, apps, digital twins, artificial intelligence (AI), edge and cloud computing were omnipresent at the fair.

This all served to highlight just how much has changed since the most recent event two years ago. Particularly in Hall 9, the domains of research and practice came together. This blend of research and industry attracted large visitor numbers from around the world. “We have made many new contacts, and the ideas garnered from talking to all these people will hopefully feed into future research projects,” commented Prof. Berend Denkena, President of the Academic Association for Production Technology (WGP) and head of the Institute for Production Technology and Machine Tools (IFW). “One clear conclusion from all this is that digitalization and automation will chart our path into the future, you can see that right here at EMO Hannover,” he added.

This year’s EMO also featured the first AI applications in the Start-up area and at the stands of the relevant trailblazing companies. Along with the strong interest in AI and machine learning, visitors’ appetite for future visions was reflected in the accompanying events and forums, where the topics included not only AI, but also additive processes, the industrial internet of things (IIoT), 5G and not least OPC UA or umati, the new standard interface between machine tools and overarching IT systems. The standout attraction consisted of the big umati showcase, which included 110 machines from 70 international firms and partners, demonstrating for the first time that the universal interface between machines and IT systems can function across all product types. According to umati project manager Dr. Alexander Broos, “the response to umati among our partners and customers has been huge. This display at EMO has successfully launched us on the market. Our next commission on returning home is to deliver the OPC UA Companion Specification at the earliest possible date.”

“Against all expectations, we can wrap up EMO Hannover 2019 on a positive note. The fair is attractive for the entire international production technology community and has confirmed there is still demand for capital investment in the marketplace. In spite of all the political turmoil, this trade fair has revealed that industry is actively addressing the challenges of the future and is determined to make its contribution as a problem solver,” concluded EMO general commissioner Carl Martin Welcker.