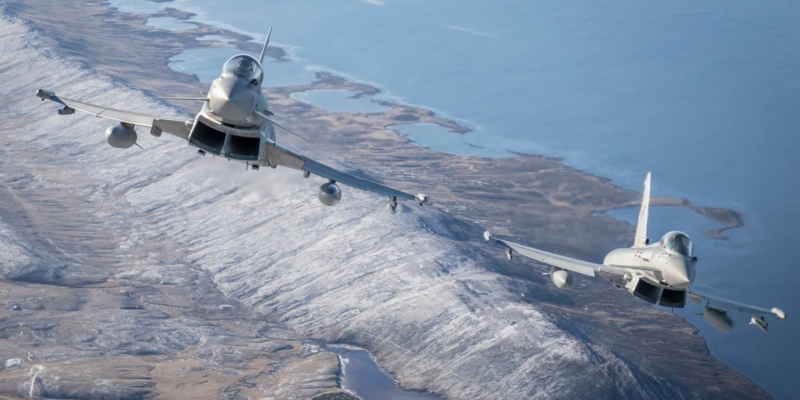 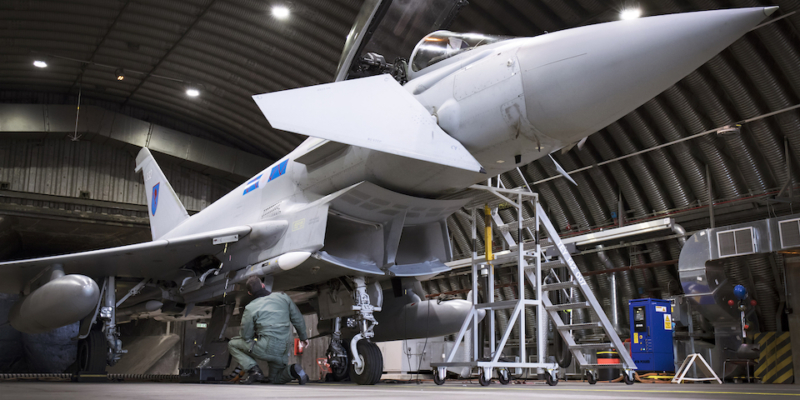 Pictured is a Royal Air Force Quick Reaction Alert (QRA) Typhoon FGR4 of 6 Squadron loaded with the latest Meteor Missile. The Meteor Beyond Visual Range (BVRAAM) Air to Air missile has begun to be fitted to the latest Typhoon jets. The world beating Meteor is many times more lethal than currant MRAAM, it is effective in dense electronic warfare environments and has a unique ramjet propulsion system-solid fuel, variable flow, ducted rocket. This system provides thrust all the way to intercept and the missile has both impact and proximity fuses. All this makes the Mach 4+ Meteor capable of destroying any airborne threat to UK airspace.

The MOD has signed a contract worth almost £350 million to support the engines that power the UK’s fleet of Typhoon fighter jets.

The £346.7 million contract, signed with Rolls-Royce, will provide maintenance support for the EJ200 engine up to 2024 as the Typhoon continues to form the backbone of the RAF’s fighter jet fleet.

Already this year, RAF Typhoon jets have led the fight against Daesh in Iraq and Syria as part of Operation Shader and undertaken Baltic Air Policing mission with NATO partners, with further NATO policing missions planned in Iceland later this year.

Not only will this contract help to maintain our world-class jets, it secures 175 jobs across the UK and boosts the skills base our world-leading defence industry relies upon.

Together with our multi-million-pound upgrade programme, this contract will ensure our Typhoon fleet continues to dominate the skies in the decades to come.

Approximately 175 Rolls-Royce jobs in Bristol, RAF Coningsby in Lincolnshire and RAF Lossiemouth in Moray will be supported as part of the contract.

Rolls-Royce will repair and maintain the Typhoon engines as required by the RAF over the five-year period. They will also be responsible for the provision of modules, spares and accessories to support the aircraft fleet, including the transportation of the equipment between RAF bases and the Rolls Royce manufacturing facility in Bristol.

Typhoon is a formidable, battle-winning aircraft and the backbone of UK Combat Airpower.

This new deal on EJ200 engine is demonstrable evidence that we remain committed to working with our industrial partners to drive down support costs and at the same time pursue excellence and deliver great equipment to the Front Line.

The Typhoon force is operationally based at RAF Coningsby, RAF Lossiemouth, the Falkland Islands and Amari Air Base in Estonia, where the aircraft respond to potential threats to UK air space in Quick Reaction Alerts. Since arriving in Estonia on 3rd May this year, the fleet have already scrambled 14 times in response to Russian activity over the Baltic Sea.

The Typhoon fleet has benefited from a £425 million upgrade programme over the last three years. The fighter jets now have deep strike cruise missile Storm Shadow, air-to-air missile Meteor and the precision attack missile Brimstone at their disposal. The RAF have also commenced trials on Typhoon of BriteCloud, a drinks-can sized missile decoy system to protect combat jets from the latest radar-guided missiles.

The Ministry of Defence invested £18.9 billion with UK industry last year, equating to £290 per UK resident, which supported 115,000 jobs.