Construction work gets underway on £135m Space Park in Leicester 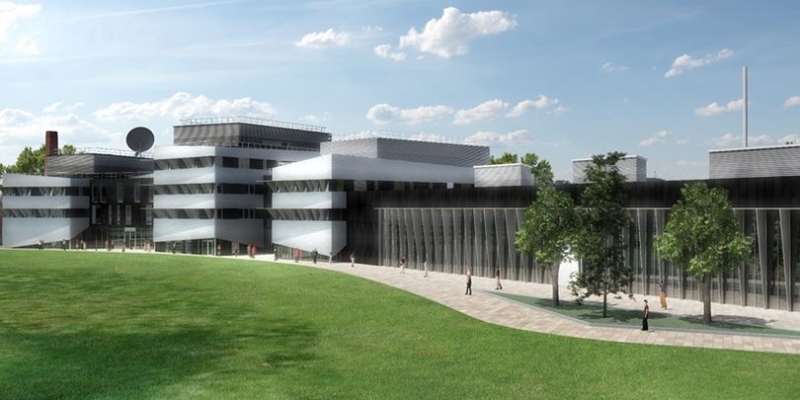 Work is underway on the £135 million-plus Space Park Leicester which could lead to 2,500 jobs.

A huge crane is now on site on land next to the National Space Centre and foundations and drainage are now going in for the first phase.

It will provide an innovation, research and incubation facility for academics and private companies, mainly making sense of the data sent down from satellites orbiting the earth.

When all phases of the space park are fully operational in the next few years it could contribute in the region of £750 million a year to the economy, as a world leading manufacturer of satellites and a centre for processing the data they provide.

Aerospace and technology companies such as Hewlett Packard, Airbus and even Amazon have already signed up, and lead partner the University of Leicester hopes it could become a catalyst for other multi-nationals to bring millions of pounds of investment to the city.

Derbyshire contractor Bowmer+Kirkland was picked to build the first stage of the space park, which is going up on a former John Ellis school site just north of the city centre.

Airbus is among the companies already signed up, and information gathered there could be used for anything from disaster and weather monitoring to providing data on transport, motorways and pollution.

Construction should be completed in early 2021.

Work on the second phase of the space park should start in the next couple of months.

That will provide state-of-the-art, robot and AI assisted laboratories to carry out research and development into low-cost satellite production.

Building and equipping phase one and phase two will cost around £100 million.

The second phase could open in the second half of next year with partners including Lockhead Martin, Airbus and Thales Alenia Space.

Professor Paul Monks, head of the College of Science and Engineering at the university, told Business Live: “The idea will be to change the economies of space, moving away from large, bespoke satellites right across to potentially 3D printing them.

“The space park will cover the process from end-to-end, not just building the technology but handling the data.

“We will be one of the only places in the UK that will be able to do that – from concept to delivery.”

The university is putting around £25 million into the first two phases, with Government, the Leicester and Leicestershire Enterprise Partnership, industry and other partners putting in the rest.

Prof Monks said they were now talking to central government about a potential third phase to the site – a £35 million satellite production line.

That could be used to make between six and 10 satellites a year, costing anything from £2 million to £50 million to make.

Work on that, pending planning permission, could get underway within 18 months and take 18 months to complete.

Prof Monks said: “Our vision is to be a driver of economic growth around the city and county which could eventually lead to big multi-nationals working with us to create further clusters of high-value jobs around the space park.

“Leicester and Leicestershire are already very competitive when it comes to investment because we are near London, with good transport and a good skills base.

“We are already talking to three multi-nationals.”

Keith Hogger, senior contracts manager Bowmer+Kirkland said: “We have made a good start on site and that the foundations are now being completed in line with the contract programme.

“The tower crane has been erected and we will be commencing the superstructure concrete frame next week.”