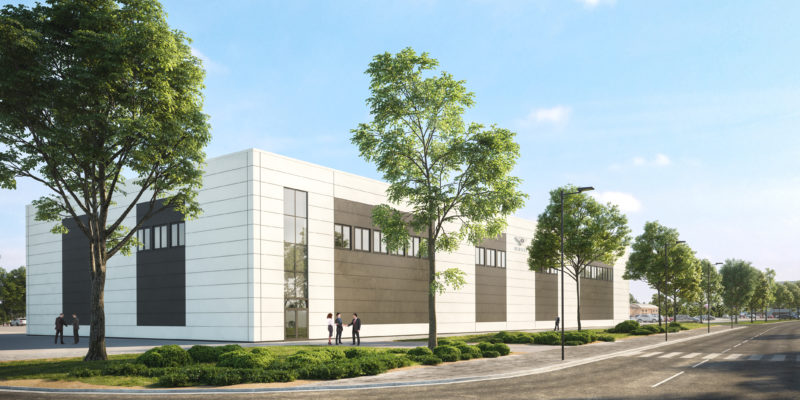 Bentley Motors today announced that work has commenced on a state-of-the-art engineering test facility at the company’s expanding headquarters in Crewe, England. The new centre is the latest phase in on-going development at the Pyms Lane site where all Bentley cars are hand-built.

With completion due next autumn, the new building will cover more than 4,600 square metres over two storeys. Included in this figure will be 773 square metres of office space and 1550 square metres designed for the installation of a single climate-controlled chassis dynamometer, operating across a range of temperatures from -10°C to +40°C.

There will also be a dedicated laboratory to run Real Driving Emissions (RDE) using the latest state of the art portable emissions measurement systems. Bentley’s Technical Conformity department will be based in the test centre, with over 100 people working in the building.

The centre will allow Bentley to meet increased consumer demand for its current range of ultra-luxury vehicles, including the all-new, performance-orientated Flying Spur, the Continental GT and the new Bentayga Hybrid SUV, which marks Bentley’s first step towards electrification.

It will also play a key role in Bentley’s journey to become the world’s most sustainable luxury automotive manufacturer, giving the business capacity to grow as it diversifies into hybrid and electric models. The British marque has already confirmed that it will offer hybrid or electric variants of all of its models by 2023.

Commenting on the expansion, Dr Werner Tietz, Bentley’s Member of the Board for Engineering, said: “Our new engineering test facility will further enhance Bentley’s industry-leading, modern, efficient manufacturing plant and allow us to grow as we diversify into hybrid and pure electric cars. It follows continued expansion and reinforces our commitment to build the finest, handcrafted motor cars in the world.”

It will also allow Bentley to carry out the latest WLTP fuel and efficiency test procedures more swiftly in-house. The World Harmonised Light Vehicle Test Procedure consumption and CO2 emissions from passenger cars, as well as their pollutant emissions. It was developed as a global benchmark for all cars and came into force in 2017.

Environmental considerations lie at the core of the new development, in line with the company’s sustainability approach, which aims to promote biodiversity and create a greener site environment. Ahead of starting work, Bentley has already safely rehomed 10 fruit trees to the neighbouring site of its flagship showroom concept, CW1 House.

The popularity of the British luxury marque’s car line-up is showing no sign of abating. In 2018, Bentley delivered over 10,000 cars for the sixth consecutive year, and this year is on target to register total sales close to its all-time record of units that it achieved in 2017.