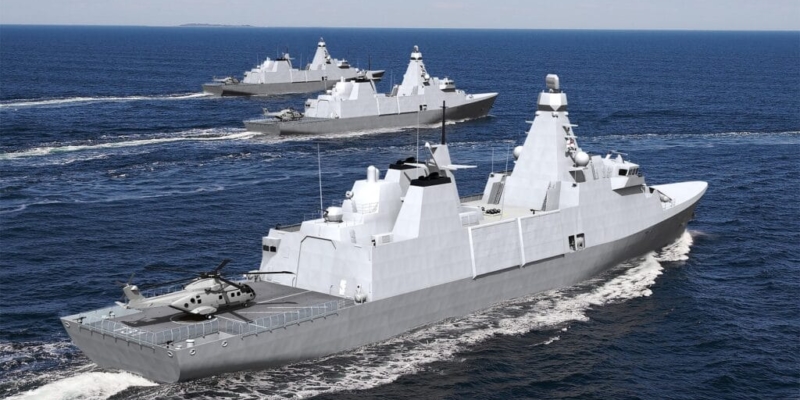 Babcock, the aerospace, defence and security company, was joined by UK Secretary of State for Defence and Shipbuilding Tsar, Rt Hon Ben Wallace MP to cut the first steel for the first of the Royal Navy’s five new Type 31 frigates, HMS Venturer.

Hosted at Babcock’s facility in Rosyth, Scotland, where the Type 31 Inspiration class ships are being built, representatives from across UK and international industry and public service, witnessed the historic ceremony signalling the official start of the build programme alongside employees and representatives from the local community.

The frigates will be at the heart of the Royal Navy’s surface fleet, deterring aggression and maintaining the security of the UK’s interests as well as providing humanitarian relief when needed. The frigates will work alongside the UK’s Allies to deliver a warship presence across the globe and enable a forward naval presence.

The symbolic first cut of steel for HMS Venturer was conducted at Babcock’s new advanced manufacturing facility, a cornerstone of the company’s digital transformation at Rosyth, which includes panel lines with robotic welding capability, as well as other semi-automated manufacturing machines.

The technology, based on modern shipbuilding practices, enables Babcock to increase automation and create significant efficiencies in the build schedule.

The event comes just one week after Babcock announced that it had secured the first export contract for its Arrowhead 140 frigate (the export variant of the UK Type 31 platform) through a design licence agreement with PT PAL Indonesia (Persero) for two frigates. The company has also been shortlisted as one of the bidders to provide a potential design solution for Poland’s Miecznik (Swordfish) frigate programme.

The event also saw Babcock’s new assembly hall named ‘The Venturer Building’ – paying homage to the first new class of frigates to be built in the facility.

The new infrastructure forms part of a £60 million investment programme on the site, on top of a further £100 million that has been invested over the last decade to ensure Rosyth’s shipbuilding capability and capacity can be optimised with state of the art engineering infrastructure and digital innovation to support further opportunities.

“This is a significant moment.  We are witnessing what the National Shipbuilding strategy can achieve. Working with our partners and customers, we are creating something we can all be very proud of. The T31 Class will show the adaptability and capability of a modern warship created with British ingenuity and engineering at its core. I’m looking forward to seeing these magnificent vessels emerge from our newly-named Venturer Building.”

“Today is a momentous occasion for the Type 31 programme, Defence and the shipbuilding industry in Scotland. As Shipbuilding Tsar, to cut the steel for the first of five new frigates that will be constructed here on our shores in the Firth of the Forth, providing jobs and innovation to the area, is a tremendous honour.

“Equipped with the technologies at the forefront of the Royal Navy’s future vision, the entire Type 31 fleet will be fitted with a range of capabilities allowing it to undertake a variety of operations at sea.”

A direct UK workforce of around 1,250 people will be employed on the programme at its height, including 150 apprenticeships, and a further 1,250 in the supply chain. This meets the aims of the National Shipbuilding Strategy, by delivering local and national, social and economic benefits through investing in its supply chain and the next generation of apprentice and graduates, whilst sustaining highly skilled workforces in multiple locations throughout the UK. The first ship is expected to be in the water in 2023 with all five ships delivered by 2028.