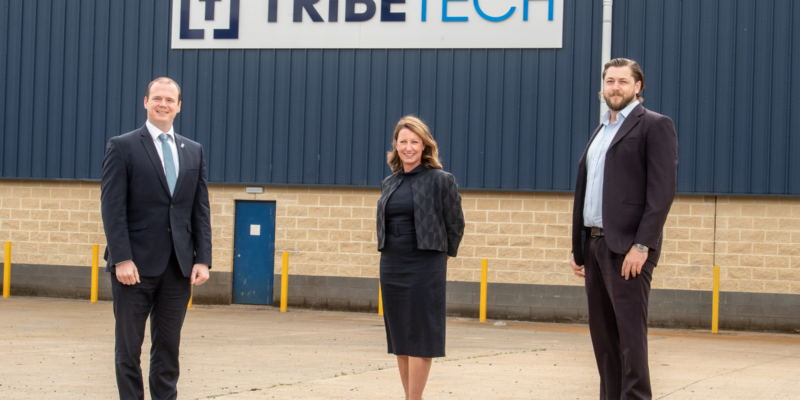 Economy Minister Gordon Lyons has announced 120 jobs for Northern Ireland during a visit to a new manufacturing facility set up by Tribe Technology.

Based in Perth, Australia, Tribe Technology designs, manufactures and sells autonomous drill rigs to the minerals industry. It is opening a new design and manufacturing facility at Enterprise Way, Mallusk.

Speaking during a visit to the facility, Minister Lyons said:

“Northern Ireland has a diverse advanced manufacturing and engineering sector which, in recent years, has grown almost three times faster than the rest of the UK. I am delighted to welcome Tribe Technology to this vibrant and highly sophisticated sector.

“Tribe Technology plans to create 120 new engineering jobs over the next five years. These roles offer the opportunity to be involved in developing and manufacturing innovative new drilling systems, as well as attractive salaries. Once all the roles are in place this investment will generate in excess of £3m in annual salaries to the NI economy.”

The Department for the Economy launched its 10X Economy vision in May. It is centred on the ability of innovation to deliver a ten times better economy with benefits for all our people.

“Using innovative technologies and methodologies for improved competitiveness is central to continued success in manufacturing. This is exactly what Tribe Technology is doing for the mining industry. The work it plans to do here in Northern Ireland is highly innovative – designing and manufacturing a new, smart autonomous drilling system for the mineral industry. I have very much enjoyed my visit to the new facility and meeting the first members of the team starting work on this exciting project.”

Charlie King, Managing Director of Tribe Technology, is a Northern Ireland native, originally from Crossgar. Speaking about the company’s decision to set up this new facility in Northern Ireland, Charlie said:

“I have spent more than a decade working in the contract drilling industry in Australia. We identified the opportunity to develop an innovative new product that will revolutionise the drill rig industry for the global minerals industry. Tribe Technology will remove all operators from the dangers of drilling operations, reduce drilling costs and increase drilling uptime.

“This new drilling system will be manufactured in our new Belfast manufacturing facility here at Enterprise Way, Mallusk, and then shipped to our first customers in Western Australia and later globally. We took to decision to locate the manufacturing in Northern Ireland as there is a wealth of heavy manufacturing industrial expertise here.

“It is great to finally see the new factory up and running and work well underway to manufacturing these new rigs. Even though we are just getting started we have already recruited 14 people to the team. The market demand for our technology has been outstanding and we look forward to ramping up to full production capacity ahead of schedule.”

“We are pleased to have been able to support and secure such a pioneering manufacturing project for Northern Ireland.”