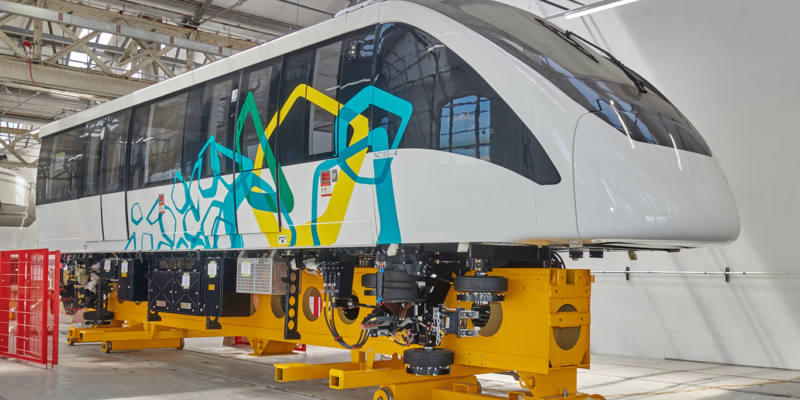 Alstom’s first two Innovia 300 monorail trains for the Cairo Monorail project have arrived in Cairo after being completed at Alstom’s Derby UK factory, with propulsion systems application led by Alstom’s site in Trapaga, Spain. The dispatch of the first 8 fully automated, driverless cars out of 70 trains (a total of 280 cars) is a major milestone in the Cairo Monorail project, Egypt’s first two monorail lines, linking the New Capital City and 6th October City to Greater Cairo.

In August 2019, an Alstom-led consortium composed of Orascom Construction and Arab Contractors signed a €2.7bn contract to design, implement, operate, and maintain the two lines. The project includes a 54 km line connecting the New Administrative City with East Cairo and a second 42 km line connecting 6th of October City with Giza.

Both lines are expected to open in 2023. After the construction phase is completed, the Alstom-led consortium will provide 30 years of operation and maintenance (O&M) services for both lines.

“I am proud of the project team for the successful delivery of the first two trains to the National Authority of Tunnels. The monorail will be a game changer for residents, decreasing commute times, congestion, pollution, and carbon emissions. It is an important part of the government’s ongoing efforts to redefine Egypt’s urban future. A future, we are committed to help actualize through safe, smart and green solutions,” said Andrew DeLeone, President Alstom Africa, Middle East & Central Asia.

Egypt is committed to developing and improving mobility services for its citizens, while reducing traffic congestion and environmental impact. The Innovia 300 monorail system allows fast construction of high-capacity lines at lower costs. Once maximum capacity is achieved, each of the two Cairo lines will be able to transport 45,000 passengers per hour in each direction. The Innovia 300 monorail system is equipped with Alstom’s proven Cityflo 650 communications-based train control solution. Benefits of this flagship technology include high reliability, flexible operation, shorter headways between trains, improved safety and reduced maintenance costs. The Alstom Mitrac propulsion system provides strong reliability and maintainability, and thanks to its permanent magnet motor, better energy consumption figures.

Alstom has been a partner to Egypt’s railways since 1971, continuously supporting the railway infrastructure development in the country. Over these years, Alstom Egypt has established a local talent pool and Center of Excellence (COE) related to signalling systems, power supply and maintenance workshops to support projects across its Africa-Middle East-Central Asia (AMECA) region. It is this rich heritage that has enabled Alstom to make a significant contribution to Egypt’s rail industry development. Today, Alstom employs approximately 500 people in Egypt with ongoing projects which includes the modernization of signalling system on the Beni Sueif – Assyut line.