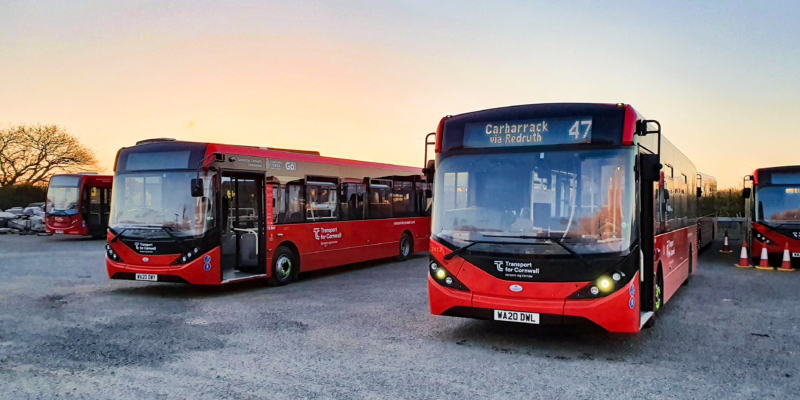 Alexander Dennis Limited (“ADL”), a subsidiary of NFI Group Inc. (“NFI”), one of the world’s largest independent global bus manufacturers, today announced that it is providing 92 new buses to Go-Ahead Group subsidiary Go Cornwall Bus for a new tendered bus network. 44 were delivered against exceptionally short lead times for the start of operations.

Go Cornwall Bus commenced services on the Transport for Cornwall network on Sunday 29th March, less than three months after it was announced by Cornwall County Council as the new operator of all its tendered bus services. Faced with a short mobilisation period and a substantially increased vehicle requirement, the operator ordered 92 new buses from ADL.

Britain’s leading bus manufacturer delivered 44 new Enviro200 single deck buses in time for the start of services, which initially operate to a reduced timetable for essential workers during the coronavirus pandemic.

A further 48 buses, including 17 Enviro400 double deckers, will follow in coming months. These were initially expected by June but their completion may be delayed by the temporary suspension of production at ADL’s British manufacturing sites in response to government advice on social distancing.

Martin Brailey, Regional Sales Director London & the South at ADL, comments: Setting up the new Transport for Cornwall network in less than three months would have been a formidable task even without the impact of current events, but Go Cornwall Bus have fully risen to this challenge. We are proud to have been chosen to provide the new fleet of buses, and our flexibility and ability to support customers’ requirements allowed us to have 44 of them ready in a matter of weeks.

Richard Stevens, Managing Director, Go Cornwall Bus and Plymouth Citybus says: “With tight timescales for the contract the two biggest worries would be getting enough drivers and buses. The deal for 92 new buses eased the strain of the second, although a huge amount of work has gone into getting a brand new fleet on the road for the 29th March 2020. With the reduction in service due to COVID-19, we have managed to not use any borrowed buses, but go live with what is a brand new fleet. We look forward to phase two and for Transport for Cornwall having the newest fleet in the country.”