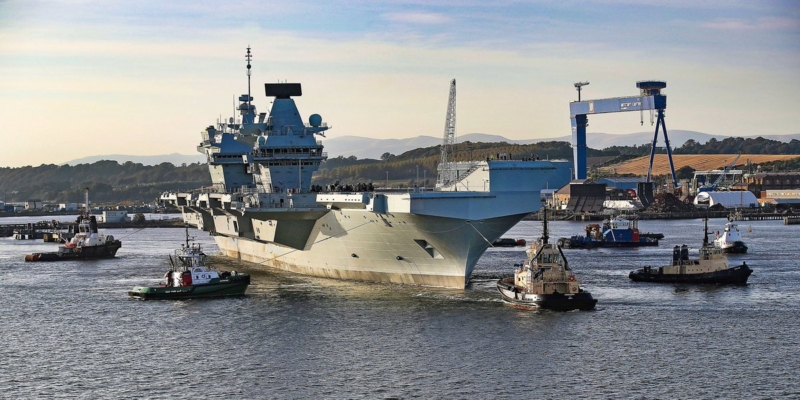 The second of the Royal Navy’s new supercarriers, HMS Prince of Wales, has set sail for the very first time.

Built in Britain, the £3bn Prince of Wales left her berth at Rosyth in Scotland, the dockyard where she was built.

The ship is leaving for sea trials and will head to her new home of Portsmouth before the end of the year.

The ship’s captain, Captain Darren Houston said he was “immensely proud” of the ship’s company. He continued…

Whether through working alongside our industrial partners to support the build and commissioning of key systems or training tirelessly to operate the ship and work as a team, the crew have demonstrated unfaltering dedication and resolve in the face of a multitude of challenges.

The warship will pass under the Forth Bridges later this week to head to open water for the first time.

Her flight deck is 70 metres wide and 280 metres long.

She will start out with a crew around 700, increasing to around 1,600 with aircraft onboard.

But that level of manning is proving a challenge for the Royal Navy.

Parts of the ship were built at the BAE Shipyard in Portsmouth before it closed in 2014.

There concerns throughout the programme that the ship could be mothballed or sold.

But it was later confirmed the ship would go into service.

The ship was named by the Duchess of Cornwall in a ceremony in 2017.

Alongside her sister ship, HMS Queen Elizabeth, she is expected to operate for up to 50 years.

Queen Elizabeth is currently on exercise of the east coast of America, operating with RAF F35 Lightning fighter jets for the first time.