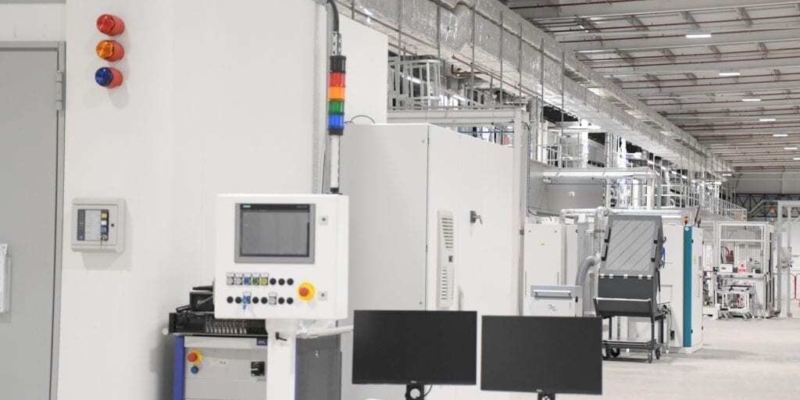 The £130 million UK Battery Industrialisation Centre (UKBIC) has moved a step closer to opening with the confirmation that the facility’s Module and Pack suite of specialist battery manufacturing equipment is now operational.

The Module and Pack assembly line is the first of UKBIC’s innovative battery manufacturing equipment – sourced and supplied from leading manufacturers across the globe – to have been installed and commissioned at the publicly funded ‘open access’ 18,500 square metre battery development facility in Coventry.

UKBIC’s highly flexible Module and Pack assembly line enables customers to test and produce low volumes of Cylindrical and Pouch cell battery technology. In addition, it has the capacity to produce 50 modules and 2.5 packs over every 8-hour shift.

The line has manual and automatic workstations; and has cylindrical cell ‘pick and place’ capability, for cell voltage testing and impedance, as well as the ability to place cells into a module in either combination of cell orientation.

The facility features a state-of-the-art laser precision specialist welder for welding cells to busbars at industry relevant speeds and accuracy. In addition, the line has pioneering battery leak functionality, which allows leaks to be more easily discovered prior to full scale up, whilst the layout has space reserved to accommodate future customer requirements such as alternative joining technologies and plasma cleaning.

Although UKBIC’s cell making equipment is identical to that of emerging Gigafactories now under construction, UKBIC’s Module and Pack equipment mimics leading cutting-edge processes you would expect to find in high throughput battery assembly plants.

As well as Module and Pack capability, the battery manufacturing equipment being installed at the facility covers the whole production process from electrode manufacturing, cylindrical and pouch cell assembly, to formation aging and testing, as well as a prototyping competence centre for specialist ultra-low volume builds. The facility is a pioneering facility, which provides the missing link between battery technology, which has proved promising at laboratory or prototype scale, and successful mass production.

Ian Whiting, UKBIC’s Commercial Director, said: “We’re delighted to have our Module and Pack line up and running. This is the first part of the facility which customers can now use.

“Our unique, open-access facility allows organisations in the UK to prove whether their promising technologies can be manufactured at the required volume, speed, performance and cost to be commercially successful. Clients can bring their own employees in to work and be trained with us on the line. Customers can also integrate processes unique to their own products temporarily to our facility. And we can help them build ‘runner lines’ at UKBIC to enable them to prove higher throughput production in early stages whilst customers build their own production lines.”

UKBIC is a key part of the Faraday Battery Challenge, a Government programme to fast track the development of cost-effective, high-performance, durable, safe, low-weight and recyclable batteries.

The £130 million UK Battery Industrialisation Centre (UKBIC) is a pioneering concept in the race to develop battery technology for the transition to a greener future.  The unique facility provides the missing link between battery technology, which has proved promising at laboratory or prototype scale, and successful mass production. Based in Coventry, the publicly-funded battery product development facility welcomes manufacturers, entrepreneurs, researchers and educators, and can be accessed by any organisation with existing or new battery technology – if that technology will bring green jobs and prosperity to the UK.

In addition to funding from the Faraday Battery Challenge through UK Research and Innovation and the Industrial Strategy Challenge Fund, UKBIC is also part-funded through the West Midlands Combined Authority.  The project has been delivered through a consortium of Coventry City Council, Coventry and Warwickshire Local Enterprise Partnership and WMG, at the University of Warwick.  UKBIC was created in 2018 following a competition led by the Advanced Propulsion Centre with support from Innovate UK.