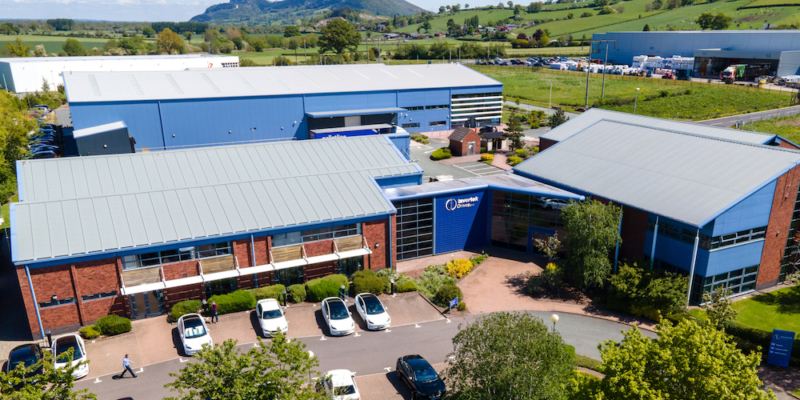 A £10 million investment is to be made at a Mid Wales-based manufacturer of electric motor control technology as it expands following significant growth in global sales.

Invertek Drives, based at Welshpool, Powys, said the investment will create an expansion to its global variable frequency drive (VFD) manufacturing and distribution centre, along with the development of a new Application Centre.

It will create 85 new jobs over the next 12 months on top of the 280 people already employed at the global HQ and follows a major recruitment drive over the past year in both its production and research and development departments.

The news is a further commitment by the company to the Mid Wales region following its expansion in 2019 with a new 5,500sq metre global manufacturing and distribution facility adjoining its existing site at the Offa’s Dyke Business Park.

Shaun Dean, CEO of Invertek Drives, and who is also Senior Vice President of Sumitomo Heavy Industries and CEO of Power Transmission and Controls Group (EMEIA Business HQ), said: “We’ve seen significant growth in sales and turnover over the past 18 months despite the global pandemic.

“Invertek’s approach to maintaining strategic stock of components has ensured we’ve been able to continue manufacturing our Optidrive range of VFDs despite the global supply chain problems currently facing many manufacturers,” he said.

“Invertek continues to commit to investing heavily in the innovation, development and manufacturing of VFD technology. The expanded manufacturing facility will allow us to increase production from 350,000 units a year to 600,000.

“This is part of our drive to create the leading next generation VFD technology that will help to further reduce energy use and associated CO2 emissions globally.”

We will add three new production lines each consisting of six Global Assembly Cells (GACS) allowing the increase in production.

The company designs and manufactures VFDs used for the accurate control of electric motors used in many applications and industries globally. These range from conveyors to CNC machines, HVAC and ventilation systems, to water pumping applications

The VFDs are also major contributors to creating energy savings and reducing associated CO2 emissions in processes by making electric motors more efficient, cutting energy use by between 30% and 50% in many cases.

They control the speed of motors, pumps and fans, ensuring they operate at optimum speeds.

The extension to the existing 5,500sq metre manufacturing facility comes just three years after it was completed. The company will also purchase the building from the Welsh Government which undertook the initial construction and leased it back.

Economy Minister, Vaughan Gething, said: “The Welsh Government has a clear focus on creating a stronger, fairer, greener economic future. We want Wales to be a country that’s at the forefront of innovating new technologies that will benefit people in their day-to-day lives.

“So, it’s excellent news that that Invertek Drives have seen such growth and that the sale of this property will facilitate Invertek’s future investment and expansion plans at Offa’s Dyke, helping create 85 new quality jobs.”

The Application Centre will be used to showcase Invertek’s products to potential and existing customers and used for training sales, technical, and servicing personnel.

Investment will also be made in its expanding Innovation and Research and Development facilities. New R&D laboratories, including a dedicated motor room, test and validation centre have already been completed over the previous two years.

The investment is being driven by Invertek Drives parent company, Sumitomo Heavy Industries Ltd (SHI), and is a further sign of its commitment to making Invertek a leader in the development and manufacturing of world-class variable frequency drive technology since 1998.

Mr Dean added: “The new Application Centre will showcase our products for existing and potential customers, as well as featuring technical and training facilities. This will act as a global hub for our sales and marketing, technical support, and training teams. In turn this supports our extensive network of international sales offices, partners, and representatives.

Further investment in the global sales network in 2022

“In 2022 we will see further investment globally in our sales network. We have already witnessed the rapid growth of Invertek Drives USA with an expanding HQ near Chicago. We are also investing further throughout the EMEIA region where there continues to be significant growth and opportunities.”

He said work would begin on the construction of the extended manufacturing facility in early 2022, followed by the Application Centre.”

Invertek Drives was launched in Welshpool in 1998 and has grown year-on-year ever since. Its international headquarters, R&D and manufacturing facility are located at the Offa’s Dyke Business Park, Welshpool, UK, where it employs more than 260 people.

Globally, the company employs more than 280 and has sales and services partners in more than 80 countries.