Protolabs customer, Alex Degnes, wants to bring two-stroke engines into the spotlight and see them break a few speed records along the way. He is determined to build the world’s most powerful two-stroke engine, and Protolabs is giving this self-proclaimed “normal guy with an obsession with two-stroke engines” a helping hand.

The Norwegian native is currently in the process of evolving his two-stroke superbike ‘Experimental Test Vehicle One’. The bike almost had its moment of glory last year on the fastest racetrack on earth – the salt flats of Bonneville in the US during the annual ‘Speed Week’. However, thwarted by the rain that turned the salt flats into a lake, the race was cancelled.

Now Alex has taken what he learned from his time at Bonneville and is using it to evolve his superbike into a faster and more powerful machine by building a brand new engine. With the 2020 races cancelled due to Covid-19, Alex’s sights are set on Bonneville 2021 where he is determined to smash through the current 91mph speed record for his 50cc category and accelerate beyond 100mph.

Alex has been documenting his quest to win at Bonneville and the build of the new bike engine via his YouTube channel. Over on 2Stroke Stuffing, more than 100,000 subscribers from around the world are following Alex’s journey with interest. Alex gives regular updates from his garage workshop, where he spends around three hours every evening working on the bike.

Alex has always been extremely hands-on and takes pride in doing as much of the work he can do himself in his garage. However after a few months, Alex realised that if he was going to create the world’s most powerful two-stroke engine he needed to call in expert outside help. After careful research, Alex turned to Protolabs for assistance.

“When I had the initial idea for the engine design, which has parts that are different from a typical two-stroke engine, I thought I may need to get it 3D printed. But I like to do things myself, so I did some research into investment casting and purchased a plastic 3D printer” explains Alex. “I printed a model and then cast a cylinder in aluminium from that model. I cast a few cylinders that were useable and played around with them, but there were problems with porosity, with lots of small pinholes.

“However, the main problem with the investment casting is that it is impossible to cast it exactly the way I want it to be. I knew that with 3D printing, I could do all the exciting things I really want to do. I could make really intricate water channels; I could guide the water flow to the places I wanted it to go, cooling various parts inside there. I can also save on crucial weight with 3D printing in a way that’s not possible with casting, for instance utilising a honeycomb structure inside solid parts. So I came to the conclusion that I really should get this part 3D printed and at that point I contacted Protolabs. I’m so glad I did.” 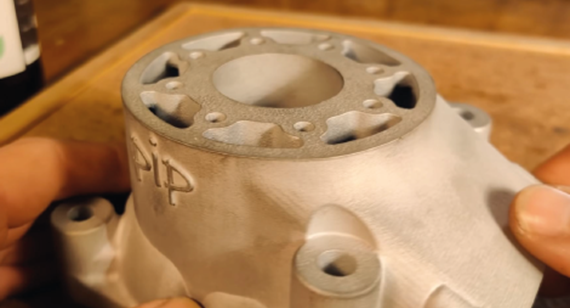 AlSi10Mg is a typical casting alloy with good casting properties and is most often used for cast parts with thin walls and complex geometries. It is an excellent choice for substitution of casted parts, is lightweight and has good thermal properties. This alloy offers good strength, hardness and dynamic properties and is therefore also used for parts subject to high loads. Parts in Aluminium AlSi10Mg can be machined, spark-eroded, welded, micro shot-peened, polished and coated if required. Alex’s design was received, the piece manufactured and shipped by us within a couple of days.

“It was hands-down the best Customer Service experience I’ve ever had. I was completely amazed by how helpful Protolabs was. And the speed was just incredible – it was faster for me to get that part ordered and printed and sent from the UK than it would have been for me to get something delivered from right here in Norway. Protolabs is almost as fast as my superbike!”

“I’m absolutely delighted with the part, it’s just perfect. It exceeded my expectations big time. I didn’t think it would turn out as good as it did. What I’m really impressed with is the fact that the model wasn’t really designed for 3D printing, I thought that I would have to do some design changes to make it printable, but Protolabs printed it perfectly.” 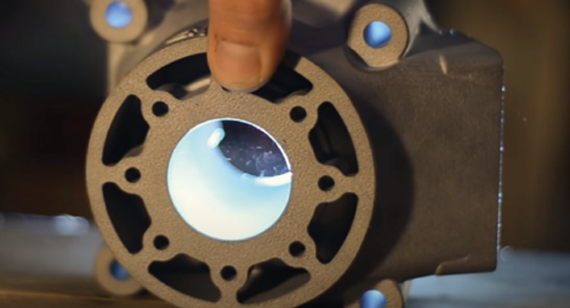 Now he has the printed cylinder, Alex is hoping to get the new engine up and running soon. Once he’s developed and fine-tuned a special gearbox system, everything will be ready to be mounted in the frame and tested. Next step America.

So does Alex think this brand new engine will win Bonneville 2021?

“Yes I do. I think we would have won in 2019 if it hadn’t been for the rain. I know what that bike’s engine was capable of, and now we have a new engine that will be much more powerful. I know it sounds cocky, but I think we stand a good chance.”

After victory at Bonneville 2021, Alex already has plans to immediately start working on ‘Experimental Test Vehicle Two’. This will be a modified bike that he will use to enter the streamliner class, which is the overall fastest category at Bonneville. Whilst ‘Experimental Test Vehicle One’ has a purist design, Alex plans for his next vehicle to utilize supercharging and more brute force. “My plan is to design and build a new streamlined bike and beat the record of all records at Bonneville, which is 235KM an hour. That’s the goal.”

What should COP26 be prioritising...