How do Japanese subcontractors embrace technology? 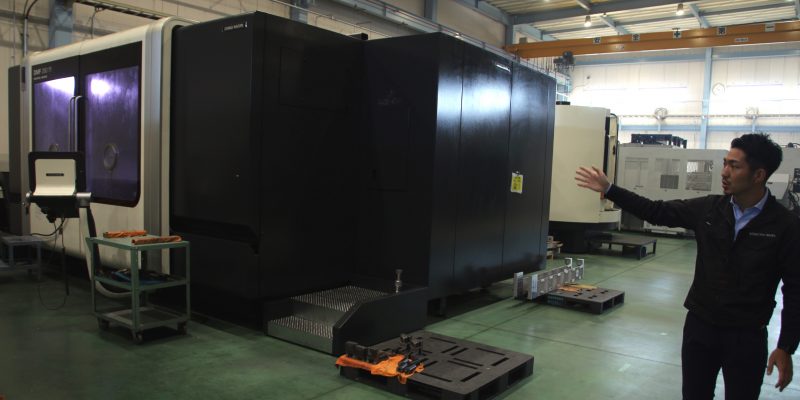 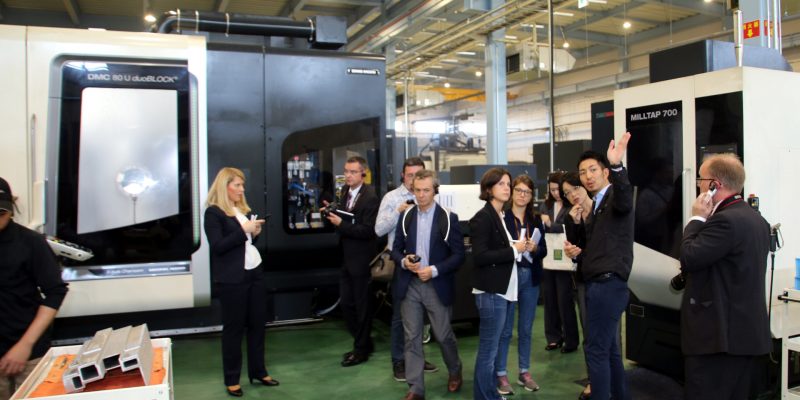 In our January issue, we reported on the DMG MORI press trip to JIMTOF in Japan and we covered some of the key points in Dr Masahiko Mori’s message to the Japanese machine tool industry. Here in this second instalment, we visit a Japanese subcontract manufacturer that was ‘hand-picked’ by Dr Mori and we take a look at the cultural differences between the UK and Japanese subcontract scene.

At the end of a busy week, the tour group of pan-European journalists made a visit to Akitani Iron Works on the outskirts of Kobe, the capitol city of the Hyōgo prefecture. On the bus trip through Kobe and the Osaka Bay area, the DMG MORI guide told us how the city has been completely re-build in the 20 years since the major earthquake disaster in 1995. A city the size and population of Manchester; Kobe was hit by a 6.9 magnitude earthquake that killed almost 6500 people, injured another 35,000 and displaced more than 350,000 people. To see a city completely rebuilt in a 20 year period was incredible; especially when we’re used to a culture of beurocrats, professional paper shufflers and poor project planners that will probably drag the HS2 train line completion to a similar 20 year time span in the UK. Moreover, it highlights the efficiency, determination, resilience and hard work that are the foundation of the Japanese culture. But what about the manufacturing…

As for Akitani Iron Works, the subcontract manufacturer first opened its doors for business in 1971 with Company Chairman Eiji Akitani founding a turned parts workshop. The current president of the company is Masiharo Akitani, the son of the company founder. In 1988, Mr Akitani took the reins of the business and started to shift the business from turning to both turning and milling. Now, the company has 43 employees at its Kobe site with another facility in China employing similar numbers.

A Paradigm Shift in Philosophy

In 2008, the company entered the market of robotic production, making everything from aluminium robotic arms, joints and bases for brands like Kawasaki and more recently the US manufacturer of automated surgical robots, DaVinci. However, the paradigm shift for the business came in 2012 when the company adopted 5-axis machining and automation for the first time. In the six years since, the machine shop has increased both 5-axis machining and automation five-fold; shifting the business from low value simple part manufacture to volume production of high value components.

When the business started over 45 years ago, it was a DMG MORI turning centre that got the business off the ground. Now shifting into the fourth industrial revolution, it is only fitting that DMG MORI is once again leading Akitani Iron Works on its journey to the future. The company now has nine 5-axis machines that include DMG MORI DMC125U and DMC80U duoBLOCK, a DMU65 monoBLOCK, NMV3000DCG and NMV5000DCG plus a DMF 260. These are accompanied by 6 horizontal DMG MORI machines that include the NH6300DCG, NH5000DCG and the 2nd generation NHX5000. If this wasn’t enough, the company also has DMG MORI VMC’s that include the CMX800V, CMX1100V, the VS10000, SVL-5020 and the MV-1003. With many of these machines connected to FMS cells or pallet loaded automation systems, it was little wonder that Dr Mori personally selected this customer visit. Referring back to Dr Mori’s JIMTOF presentation, Akitani is the epitome of the message Dr Mori wants to portray to the Japanese marketplace. The successful implementation of 5-axis, automation and the integration of Industry 4.0 are all critical for the future of Japanese manufacturing; and Akitani are certainly showing how it can be done with remarkable success.

Only days before the Akitani Iron Works visit, Dr Mori announced measures such as loaning 70 5-axis machines to innovators and technology leaders in the Japanese manufacturing sector to raise the profile and acceptance of 5-axis machining in Japan – all part of the 70th Anniversary celebrations at DMG MORI.

MTD Magazine asked Akitani Iron Works President, Mr Masiharo Akitani for his perspective. He said: “We have always had a close cooperation with DMG MORI and they have supported us with the introduction of IoT technologies, automation and 5-axis machining. I have been to Europe on many occasions to learn about the latest technologies on the continent. Previously, I thought Japan is number one as we have everything here for the latest technologies, but it is really remarkable to see the technology available in Europe. We aim to learn from these technologies and bring the lessons back to our own plant.”

We also asked the Japanese Company President what he identified as the main differences between Europe and Japan, he said: “What I see are three main differences.  Training and education at European companies is different. Even if you work at a small company, you can go to a separate training facility for up to three years to become a skilled engineer, which is very important. In Japan, you hire people and train them inside the company. This gives staff the practical skills, but you do not have the opportunity to learn the fundamental academic basics of technology”

“The second difference is the work life balance and the work style, which I see as very impressive. In Europe, you only work a limited time or number of hours, yet your productivity is high and this is something we want to introduce to my own plant in Japan. Workplace reform is an important topic in Japanese society at present. This is because many employees have limited holidays and work long hours. We make it a rule that our employees only work 8 hours a day and we reduce overtime. This changing philosophy in Japan is another reason why we cooperate closely with DMG MORI to implement next generation technology.”

“The third point is the very sophisticated nature of the fixtures and the tools. In Europe, many companies use high technology fixtures and this is where we see Japan as way behind Europe. Two years ago, we completely changed our work holding to a European manufacturer of clamping devices for 5-axis machines, we are now the biggest Japanese consumers of SCHUNK technology.”

Touring the state of the art facility and talking with the third generation of the family, Production Manager Mr Naoya Akitani, he identified tool inventory control and fluid management as the next points for improvement. Asking the journalists how these topics are managed in Europe, it almost felt as if solutions widely adopted in Europe had not quite made it to Japan. Regardless of whether it is technological differences or poor Asian marketing from the tooling/workholding technology segments, Akitani Irons Works are always keen to learn from their European counterparts to extend their industry leading position.

The Kobe Company is split into three main categories that include industrial robots, parts for the robotic semi conductor device industry and the medical device market. Commenting on this, Mr Akitani said: “The robot industry has been growing constantly but in 2016, rapid growth started and from conversations with Kawasaki Heavy Industries, we expect demand by 2021 to be three times higher than in 2016 in Japan. This is due to the rapid growth of autonomous vehicles and the respective semi conductor components.”

Kawasaki produce 14,000 robots each year and Akitani manufactures 400-500 different parts for Kawasaki with a production schedule of over 10,000 parts every month. To cater for this, Akitani has identified four main challenges – prototyping, small batch and series production and also the production of complex parts. With DMG MORI, the small business can monitor the status of its 24/7 production at all times.

Embracing Industry 4.0, Mr Akitani says: “At the start of our Industry 4.0 journey, we decided to only use one single integrated system that takes us from programming to end product. So, when we receive an order from our customer, this is passed to the programming department. The data will be transferred automatically to our machines and the operator simply has to do the set-up operations. From this point, the flow to end product is very efficient. We have also made improvements with the management of tool data. This data is also controlled in our office after the operator has set the tools and inputted the tool data into our DMG MORI tool pre-setting system.”

“Our aim has been to conduct production with minimal staff and this is why we have followed the path of 24 hour production. On this path, we have only encountered a few issues such as the chip conveyor system and tool life management. Regarding these factors, DMG MORI came to us and suggested DMG MORI Messenger. This not only helps us to visualise availability but also to analyse the alarm and the cause and frequency of alarms. This has helped us to improve machine uptime and eliminate common factors that cause machines to stop. This has helped Akitani to increase machine utilisation from 65 to 88%. We thought we were doing 24/7 operations from Monday to Friday, but that was only 65%. Checking alarms and their causes has rapidly improved output to 88%.”

With regard to controlling tool wear and tool life, the tool information is gathered on our second floor office. “In the last two years, we have also spent more time analysing machines and causes of failures. We always want to know why the machine stops at night when the machines are unmanned. To analyse the reason, we worked with DMG MORI and we found that our chip conveyor systems and swarf wrapping around tools were both issues. We will tackle this with DMG MORI by gathering information through Messenger. Once we resolve this, we will look at WorkBliq, as preventative maintenance is critical for 24 hour production.”

Coping with a huge deviation in component types, Akitani has a team of programmers that generate up to 60 new part programs each month. These programs are downloaded to the specified machine where material and the respective components for end users are delivered on a JIT basis. With the exception of old machine tools, all DMG MORI machines and machines from different manufacturers are connected through DMG MORI Messenger, giving office staff a global overview of production. This highly automated method of manufacture ensures that only 10 of the 43 staff at Akitani Iron Works are on the shop floor operating and loading/unloading the machine tools. This business model fits perfectly with the Japanese workplace reforms being implemented – it also falls into the utopian manufacturing vision that Dr Mori presented at JIMTOF 2018.